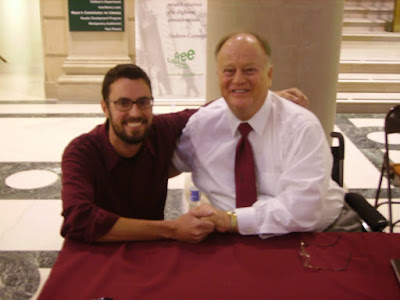 It was March, 1968. Max Cleland, a brash, 25-year-old Captain in the U.S. Army, was nearly finished his tour in Vietnam. 30 days and nights was all that stood between him and a plane ride home to Georgia. He’d put in his time. He’d be honorably discharged.

But he didn’t feel right. He hadn’t seen much action and, in his words, he wanted to “see what he was made of.” He volunteered for a mission in Khe Sanh. Soon after he regretted it, but was unable to get out of the commitment.

He was dropped from a helicopter, into the jungle. For days he holed up in a giant, moonlike crater. The hole was so fresh he could smell the scorched earth, ash, and chemicals. He couldn’t see the enemy, but they were firing. Men were bleeding, screaming, dying.

Cleland survived the Battle of Khe Sanh. Days after he was ordered afterward to set up a radio relay station on a nearby hill. The chopper set down, and as he ducked beneath the rotors he noticed a grenade in the grass. Must’ve fallen from someone’s pack, he thought. He reached down to pick it up.

I work part-time as a bookseller. It’s no way to get rich, but I really like the shop I work for (Joseph Fox, an independent!), and sometimes I get to meet cool authors passing through Philly. I met Mr. Cleland last week at the Free Library.

When he got back from Vietnam – both his legs and his right arm blown off – Mr. Cleland wasn’t sure what to do with his life. He’d spent a year and a half recovering. As he said: “In December 1969, I sat there in my mother and father’s living room, me being an only child, and single, and I said to myself…no hope, no girlfriend, no car, no job, no money…now is a great time to run for the State senate.”

Against great odds he won, and went on to become Georgia’s youngest Secretary of State, head of the Veterans Administration, and, later, a United States Senator.

The word “hero” is diluted and often meaningless these days, but in his case it applies. Not because of what happened to him. But what he did afterward. And what he’s doing now.

We all have different experiences – though few are as traumatic as his. I was touched by his story. When the long line died down, I got a chance to tell him about my project. I asked: “If you could pass just one piece of advice on to the younger generation, what would you say?”

Just two little words. But coming from him they meant a lot.

Listen to the Free Library podcast.