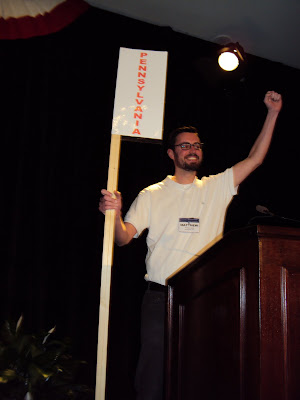 On Sunday I traveled down to Washington D.C. for the Alzheimer’s Association 2010 Advocacy Forum.  For those of you confused by Long Capitalized Names For Things, what that means is that I convened with hundreds of other Alzheimer’s advocates for three days.  We spent the first two getting to know one another, sharing our stories, listening to speakers, and generally figuring out how to be better advocates, then the final day storming Capitol Hill to demand action.  The final day sort of looked like this.

Search for “really, really nice people dressed in purple, filing slowly off a bus” and you will find that exact video.  (We were fierce in our own way.) 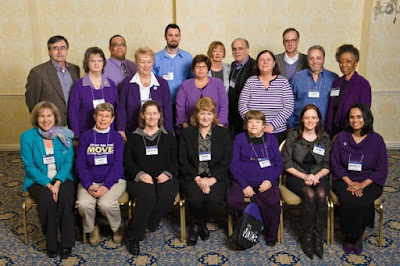 Here are my five awards for the Forum:

A lot of competition for this one, but the award goes to Betty (sitting above, third from right).  She made me feel like a celebrity every time I walked into the room.  She’d take my arm, as if it were a banister, and say, “Matthew!” then turn to the nearest person and say, “Look, it’s Matthew!”

The inside of a congressman’s office.  Of the three offices I visited (Arlen Spector, Bob Casey, Joe Sestak) Spector’s was the biggest, as you might imagine.  You walked in and there was a reception area, then you walked through another door and there was a room full of cubicles, then there were some other offices, then you walked through another door into a conference room with a big long table.  It just kept going and going.

We had three “asks” the primary being getting them to co-sign the Alzheimer’s Breakthrough Act, which would create $2 Billion in funding for Alzheimer’s research.  Casey’s office was on board, and so we thanked them for that, and asked that they consider signing the other two related bills.  At the time of this writing, Sestak and Spector have not yet signed on.

Nearly 400,000 people in Pennsylvania suffer from Alzheimer’s and related dementias.  If you factor in caregivers, that’s nearly a million people who are struggling with this disease as you read this.  That’s…almost the same amount of people that live in Philadelphia.  Imagine it that way.

Quote of the Forum

As told by a young woman I had dinner with on Sunday night, remembering her mother.  This girl couldn’t have been more than 35, and yet her mother was already dead from Alzheimer’s.  Until this trip I didn’t realize the frightening number of early-onset cases.  Every year it’s getting worse.  This girl, a hairdresser from Indiana with pink hair and a nose ring, told a story about her mother, who even in the final stages of the disease never lost her sense of humor.  They were having dinner at a steakhouse one night and, on their way out, her mother stopped at another person’s table.  A black man, about 450lbs.  Her mother was leaning right over the guy’s plate – so you can imagine how uncomfortable he was.  He could tell she was not well and so he tried to be polite.  Finally he said, “Ma’am, is there something I can help you with?”  Her mother said, “No, no, it’s just…you look just like Elvis!”

So many sad stories and yet, within, moments of grace and humor.