On November 13, 2009 I led the first “Spaces Between Your Fingers Workshop” at an Alzheimer’s care residence in Manhattan. It was the first of several I’m doing in partnership with Artists for Alzheimer’s (ARTZ), a New York-based non-profit.

I have a secret
That will break your heart

When you close your eyes
This page is blank.

There is no poem here.
There never was.

What you’re seeing are shadows
Cast by your eyes.

I wrote that about two years ago, early in the morning, on my way to teach in North Philadelphia. It was still dark out. The El dipped underground, into the deeper darkness, and I saw my reflection.

I used to do that a lot: scribble little poems or descriptions or metaphors on the way here or there.

like a woman
under an umbrella
in a meteor shower

I don’t remember when I stopped, or why.

I guess it was just easier to zone out.

Funny how these little fragments vanish from us…funnier still how they find us again. Last Fall I was on the Jersey Turnpike, twenty miles outside Gotham, on my way to lead the first workshop, when I found that poem in my notebook.

I sunk down in my seat.

“Hi, my name is Matthew Smith…”

Six weeks earlier…and I’m in New York. It’s Summer. Sitting across from me at the café are Lauren Volkmer and Dr. John Zeisel, New York Coordinator and co-Founder, respectively, of the non-profit Artists for Alzheimer’s (ARTZ).

In their own words: “ARTZ brings artists of all kinds to the world of Alzheimer’s to create the strong emotional connections that only art provides. Discovering the ways the arts reduce psycho-behavioral symptoms, we can enrich the lives of people living with Alzheimer’s in new, yet fundamental ways.”

A few years back ARTZ began running special tours at MOMA (the Museum of Modern Art). They put on painting workshops and poetry readings and comedy shows. They connected with The Louve, in Paris, the Tribeca Film Institute, and other partners around the world.

As those who know me might attest, I’m not a “planner.” I’m a “be reasonably prepared and see what happens” kind of guy.

Life is too long to worry about all the details.

But, perhaps because I had so much respect for ARTZ, or perhaps because I was nervous—I hadn’t read to anyone with Alzheimer’s since my grandfather died—I thought I should at least have an outline. So I made one.

Okay, it was messier than that. Way messier. I’d exchanged a few weeks’ worth of emails with the facility’s program director, and we’d agreed on the basic three-part format.

But still…I was nervous. Uncharacteristically so. I sat up nights, fretting. Would they be able to follow the story? Would they remember it? AND WHAT ABOUT THE DISCUSSION? How would I even raise such an abstract concept as “wisdom”? What is wisdom, anyway? How do you talk about it? Would they fall asleep or zone out?

And above all, the question I kept coming back to, again and again: if they weren’t even going to remember me being there…what was the point of doing it at all? 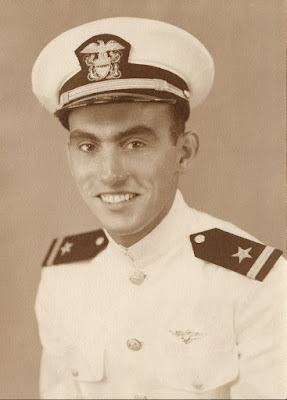 My grandfather, circa age 27

My grandfather didn’t exude wisdom, but doled it out, like the dollar bills in his handshake. One time, when I was younger, I strained across the table for the salt and he said: “Your tongue is longer than your arm.” (Try working that out when you’re seven.)

Another time my grandmother was complaining about being lost and he said: “You know the difference between a person who is lost and person who’s not, Peg?”

He waited a beat.

I thought about that comment as I puzzled over the New York City subway map.

And I remembered the time they found him in the back row of a dark church…rocking nervously, arms tight to his body, fingers interlocked, eyes shut tight. “We couldn’t find him for hours,” Mom said.

Just be patient, I thought.  It’ll be okay.

We gathered around a long, rectangular table in the dining room. There were eight of us, including the program director and myself.

She called for attention. “This is Matthew, he’s been traveling around the country. He has a project he’s hoping you can help him with.”

“Has anyone heard of the secret of the spaces between your fingers?” I asked.

“Well, like any secret, it isn’t any good unless you pass it on to someone else.”

I told them I’d written a little story, dedicated to my grandfather, and would like to read it, if they didn’t mind.

“I think that would be lovely.”

A woman, about the age of my grandmother, placed her hand lightly atop mine, looked me in the eye, and smiled.

Here’s how life can surprise you:

I began to read my story, slowly and clearly—Have you ever really looked…—and about halfway down the second page…I stopped looking at the text! What was I doing? Why was I throwing my hands around like that? What was happening?

Without planning to, I began performing the story. Not a Shakespearian performance, but in my own quiet way. I ad libbed; skipped ahead. They interrupted; asked questions. “My father was just like that,” someone said. And we laughed. I picked up the story again.

When the whole thing was finished—seven minutes, though it felt like 30 seconds—there was applause…and, my favorite part, as the applause died down, a few quick glances at the spaces between their fingers.

What I’d sensed, as I began reading, was that they were reacting to me, not the text. Most times when you read, the audience is following the story, the narrative thread.

In this case, I was the thread.

(A crucial lesson for anyone working with people with Alzheimer’s/dementia.)

After the story, I wasn’t nervous anymore. I felt connected to the group. The question I began the discussion with was: “Who is the wisest person you’ve ever known—someone you’d go to for advice in any circumstance?”

Ruth said: “My husband. He was very smart, and very caring. I consider him wise.” They’d been married for over sixty years.

Something Ruth said reminded Mary of her parents: “They were idealists, but they lived to those ideals the very best they could.” She thought a moment. “It’s only as I’ve gotten older that I realized what an impact they had, and that I’ve had, too—all those years really meant something, you know?”

We weren’t afraid of the silence, never in a rush for answers, but when we sensed a lull, we redirected the conversation.

Bill spoke in long, winding sentences; sometimes he lost where he was headed to, and where he’d come from. But we didn’t rush him. The point he came to, and seemed happy with, was: “Each generation leaves its history for the next.” He listened closely as April spoke.

It’s hard to explain what such a conversation feels like. There’s this fear at first (I don’t know how else to describe it)—fear that the conversation will be disconnected, disjointed. Like two hands reaching out, but passing through one another.

It was the same way when I used to talk with my grandfather, near the end. But then…a connection. A shared emotion. A laugh. It begins slowly. “My daughter was like that.” And then the memories start flowing—from all sides—one catalyzes the next—and the fear goes away, and twenty minutes later you remember where you are.

There is a difference between wisdom and intelligence. That’s something that came up. When you go to someone for advice—when you seek wisdom—what you’re really seeking is another perspective, someone who looks at the world in a different way, someone to help you see beyond what’s in front of you. That wisdom may come from a five year old, who looks at the world in his own way, or from a 95 year old, who’s seen all the angles, and knows what you need to hear.

There is a difference between art and craft, too. I remember Lauren (from ARTZ) saying that when we first met to discuss the partnership. I took that to mean that craft is making something, anything, and putting it into the world. But when you make a piece of art there is a part of you bound up with it.

So our discussion of wisdom bridged into the card-making. “If you had just one piece of advice to pass on to a child or grandchild—or to a younger version of yourself–what would it be?”

Every card was different, and yet there were fascinating parallels. The idea of honesty came up multiple times. The importance of trust.  I didn’t see why at first.

Then later I thought: imagine having the world disappear every time you close your eyes, and needing those around you to help make sense of it.

When you finish reading this, what will you do?  You’ll update your facebook status, or pull the boiling kettle from the stovetop, or peek out your airplane window.

a tiny red light
winks in the distance.

Leading these workshops (I’ve since done another) has been one of the best experiences of my life. I think back on that original question – if they’re not even going to remember me being here, what’s the point of doing it at all? – and it seems silly. Like asking if you know a song is going to be over, what is the point of listening to it at all?

The point is that it feels damn good to sit across from someone and talk with them, to laugh with them, and know they appreciate you being there.

To be in that moment.

People with Alzheimer’s have trouble connecting these moments, organizing them, filing them. But that doesn’t diminish the importance of the moments themselves.

To learn more about the ARTZ program, visit their website here.

If you are interested in hosting a workshop at your facility or school, please contact me at spacesbetweenyourfingers@gmail.com

4 responses to “Artists for Alzheimer’s”