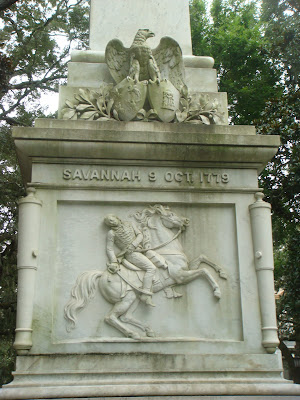 Well-rested and freshly-laundered after my stay in Florida, I headed up I-95 toward Savannah, Georgia. Having driven as much as 850 miles in one day, 146 seemed like nothing. There are a million ways to alter your perspective. One is to simply get a bigger map.

Savannah was beautiful. The city center was small and gridded so I navigated just about all of it in 5-6 hours. Did you know that most of Forrest Gump was filmed in Savannah? It certainly looked Southern, with its grand houses, its fountains, its verdant parks, its mossy Civil War statues, but I wasn’t overwhelmed by “Southern-ness,” if that makes any sense. The city center was more eclectic than I expected. When I did encounter someone with a slow, thick-as-peach-marmalade Georgia accent, I savored every word.

If you ever go to Savannah, and you’re into people-watching, be sure to buy a plastic cup of wine to go at Gallery Expresso. Walk a few blocks south to Forsythe Park and find a nice shady tree to sit beneath. You’ll find a homeless man there who will weave you a beautiful rose. 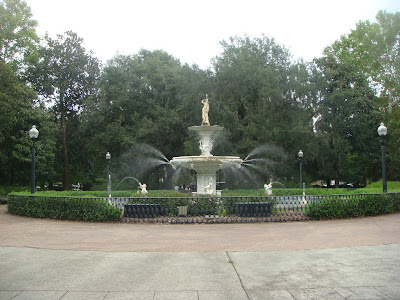 By 6pm I was weary from the 95 degree air and looking forward to getting on the road toward Charleston. Two blocks from my car I noticed the central office of the Savannah College of Art and Design (how had I missed that before?), and so, as I’d done so many times on this trip, I bargained with myself. “Just five more cards. Go in and see who’s inside.”

The guy at the front desk said: “It’s summer, no one stays past five, but if you want to wander around, knock yourself out.”

I found one person still working in the far far corner of the building. “Wait a minute,” she said. “You’re from Philly? Me too.”

This was Jesse. Instead of a lonely drive north, I spent the twilight talking about art and books and travel. We made a list of three books the other person had to read, and promised we would. She was from a military family, and had moved something like 17 times, including four different high schools in four years. “What was that like?” I asked her. “It’s funny,” she said. “For a while you think you’re so free, and almost better than others, in a way, because you’ve traveled so much and looked at the world from so many different perspectives. But I’m realizing now that I’m probably just as dependent on the change as they are on the constancy. And that scares me a little bit.”

If you’re ever in Sav. pop into Chroma Gallery and also wander (slowly) through the city market. That’s where I found this next guy, Brian MacGregor. For nine years he’s been transforming people’s dreams into art. Look real close when the camera zooms in – you can see the original dream pasted beneath the surface.