The SBYF Project is all about collecting and celebrating the wisdom of everyday people, but it’s also cool when someone distinguished decides to participate.  We were in Iowa City yesterday, so I decided to drop in on the famous Iowa Writer’s workshop.  They have a little house on the edge of campus.  It was quiet inside, except for a student worker typing with headphones on.  I told him a little about the project and he said, “I think I have someone you’ll want to talk to.”  He led me around the corner and knocked on an office door.  “Hey, Jim…there’s a guy here I think you should meet.”

I got inside the office, and there was James McPherson – the first African American to win the Pulitzer Prize for fiction! I got to talk with him for a few minutes and he thought the project was “pretty cool.”  He took a card and said he would mail back a piece of writing advice.  Thanks to him and to everyone I met in Iowa City.

From there we started southwest toward Kansas City.  Rural Iowa felt like a sprawling corn maze – in many places the crops were taller than the car, and we never knew what was going to appear around the next bend. 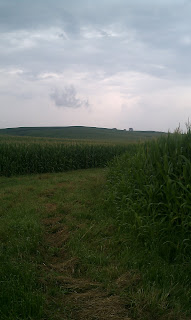 One of the towns we emerged in was Fairfield, Iowa.  Talking to the bartender where we ate lunch, we learned that, shockingly, Fairfied was the epicenter of the transcedental meditation movement.  “You can imagine the clash when the hippies poured into a place like this,” he said.  But somehow the two worldviews had meshed, and so we found middle-aged women with nose rings sharing the same sidewalk as red-faced farmers in jeans and red flannel.

Outside the organic coffee place, we found Ryan, and offered him a challenge.

(Hint: Ryan said the mistake most people make in trying to solve a Rubik’s Cube is trying to finish one side at a time. He does it by layers, working from bottom to top. Once he gets the first two, he knows the top layer only has 57 possible combinations…which he’s memorized.)