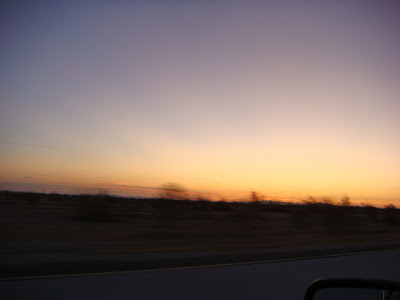 The following are scraps from my journal. I’ve made no attempt to shape them dramatically, or to make sense of them, though I may someday.

I’m driving in the blur of night when suddenly my engine is on fire. The flames are bright orange. I’m in the Arizona desert at 4:00 am and I have two choices: I can dump what’s left of my bottled water on the flames – try to get it out quickly – or save the water and let it burn. How does one get into such a situation? What does one do?

I imagined the last part. There are no flames. There’s not even smoke. Just the smell of smoke.

I punch myself hard in the ribs. When fading behind the wheel, a solid shot to the midsection—knuckles between ribs—is far more effective than a slap to the face. The slap wears off faster.

I coast to the side of the road. Put my flashers on. Now I feel safe. The smoke isn’t coming from the car. For a moment I sit atop the hood, back on the windshield. I’ve covered hundreds of miles since I left San Diego. I’ve climbed 4,000 feet above sea level. Yellow lights flash : stars fall above.

Two days before, in San Fran, my cousin told me a story about breaking down in the desert. “Slept with my dog beside the car,” he said. “Woke up to the most beautiful blue sky. Then I looked a little closer: there were four jackals atop the hill, watching me. The dog stepped toward them. He didn’t understand they were different from him.”