I set off on a journey I thought was about talking; turns out, it’s been about listening. 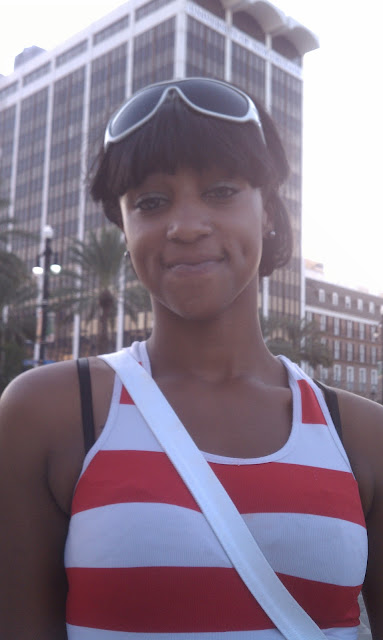 This is Alisha.  I met her at the Memory Station I set up in New Orleans. 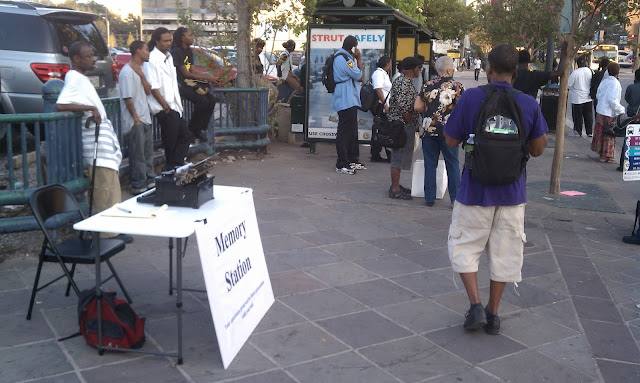 “Simple.  You tell me a memory – anything you want – and I’ll type it up here on my typewriter.  When I get home, an illustrator will illustrate the memory, and we’ll preserve it in our archive.”

“Why you wanna do that?”

The Memory Stations are really peaceful for me.  That probably seems like a strange word choice, but I just spent the past thirty minutes rummaging around in my brain like you’d rummage through that bag full of Scrabble letters, and it’s the best I can do.  It’s peaceful.  And fun.
I usually set up the Memory Stations around 5 or 6pm.  After a hectic day of being a disruptor (albeit a very polite and earnest one) – it’s nice to just sit and be still.  The hardest part of the whole process is NOT finding a public area to “open up shop” (that’s easy), but finding a place to park close enough to that area.  This is necessary because my typewriter weighs as much as a small donkey. 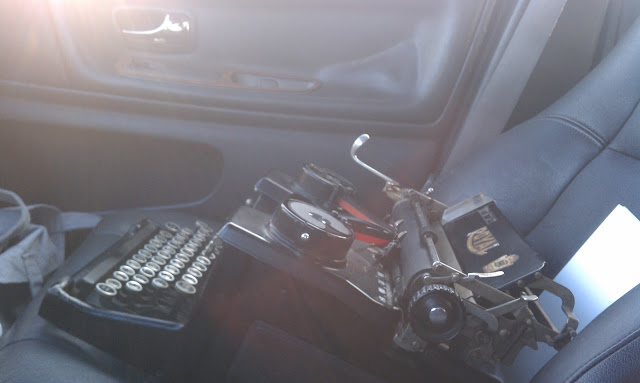 As I said before, so much of art (any art) is shaped by constraints, and in this case, the most interesting constraint is time.  The best metaphor I can come up with is that it’s like being a caricature artist – you sit down and I render the image (your memory) as best I can, based on the raw material you give me…with the twist that at any moment you may abruptly get up and leave whether I’m finished or not (when the bus comes).  All you leave behind is your unique handprint traced onto a postcard and, if you want, your name and a photo.

“Is it okay if it’s not a happy memory?” Alisha asked.

“It can be any kind of memory you want.”

A postcard is limited in so many ways…but the one thing it can do, and do well, is capture and share just one human experience.

So I’m down in New Orleans and I want to know what it is like to live there.  Or to have lived through Katrina.  That is a human experience that I am capable of, but have not had.  Same when I’m talking to someone who lived through the Depression or fought in WWII.

So Alisha began talking, and I scribbled notes as fast as I could on a yellow legal pad.  And after she got on the bus, while it was fresh in my head, I typed it up.

Alisha
New Orleans
I have to warn you, this is not a happy memory.
Earlier this year two guys invaded our home.  They went out back first and shot my uncle in the head while he was sleeping.  They shot my auntee in the eye, though somehow she survived.  There were more shots, and then they came back inside.
There was no time to run.  I felt in a daze.  “Please don’t kill me,” I begged, “I have a one year old son.  Please don’t kill me.”  He raised the gun.
“Please,” I begged.  “What do you want?”
I’ll never forget his chilling response.  He said: “Souls.”
Then I heard a click.  The gun was out of bullets.  He ran outside, and the cops shot him.  He bled out in the street.  They caught the second man and he is awaiting trial.
Apparently he had some history with my uncle.  I don’t really know the whole story, or even want to.  Every morning I kiss my son and I thank God for letting me be here today.
We still live in the same neighborhood.
*

When she told me what the man had said – “Souls” – that was literally the most chilling thing I had ever heard or read or could ever imagine.

And this was just the person next to me, waiting for the bus.

She got on the bus and went on with her life.

I’ve never had an experience remotely close to that, and I don’t have a one year old son.  But I felt that, you know?  I was there.  It shook me.  And that’s remarkable, this power of empathy we have.  I do know what it means to love someone, and to lose someone, and to be afraid, and I can use the fragments of those emotions to put myself in her place (just for an instant).

Another thing: it’s amazing – astonishing – how open people have been, within seconds of meeting me.  This doesn’t have to mean a “confession” or some sad, heavy trauma (although I get that); just as often I get a total stranger telling me all about the first time they fell in love.

So anyway, on to the photos, but, as you can probably sense, I have been totally inspired and energized by this whole experience.  It’s brought such clarity, such perspective, such – here’s that word again – peace.

because it’s been so effing crazy. 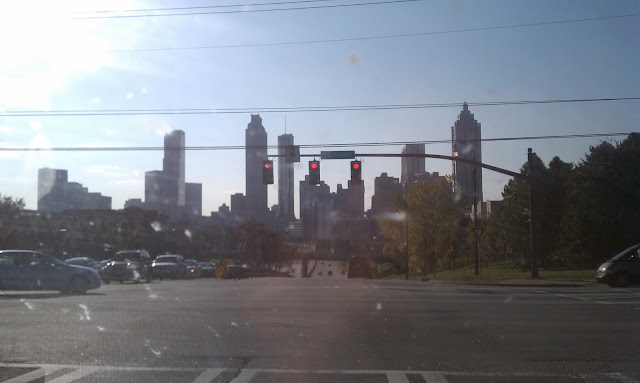 Here’s your obligatory skyline shot of Atlanta, featuring just a few of the 10,000 bugs I killed on my windshield. 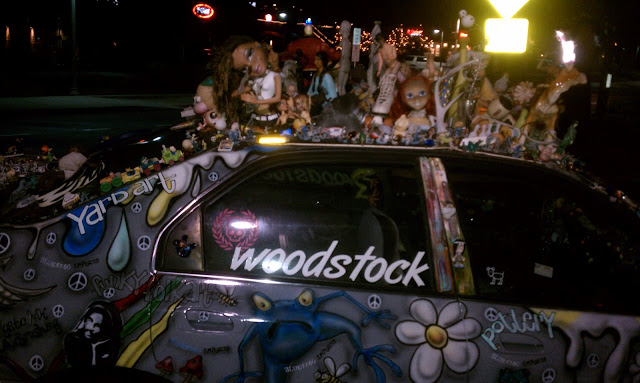 You slap a few stickers on your car and some a-hole just has to come along and one-up ya. 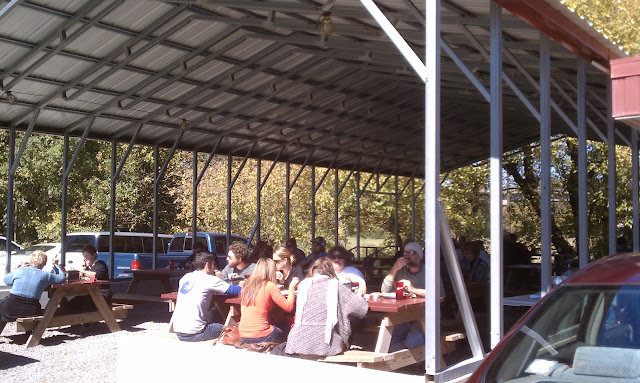 So, I went from New Orleans, to Gulfport, to Mobile, to Montgomery, to Atlanta, to Woodstock (Ga.) to Athens, back to Monroe (Ga.) to leave a postcard for the current oldest person on Earth (116…I showed up at 8am but she wasn’t seeing visitors…left a postcard…fingers crossed), then up to one of my favorite places, Asheville, North Carolina (pictured above, 12 Bones BBQ). 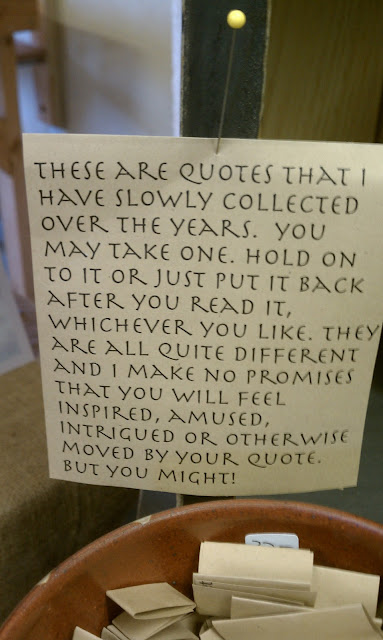 From Asheville I drove north for a return visit to the International Storytelling Center in Jonesborough, TN.  Here’s a beautiful little backstreet there: 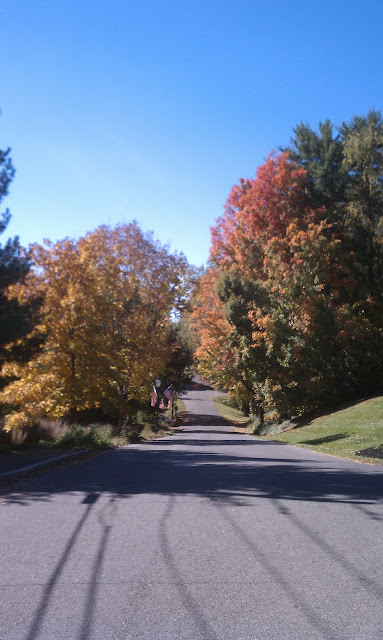 And then I drove north again, up into Kentucky. 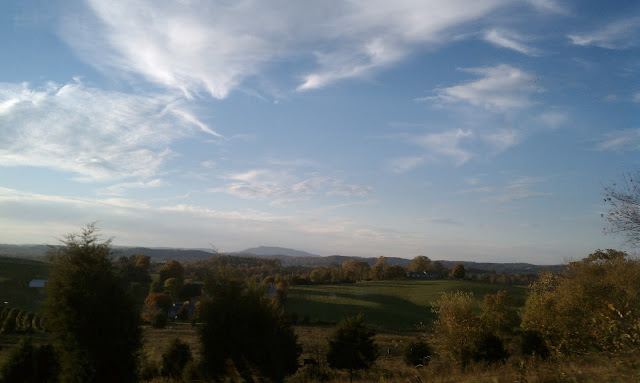 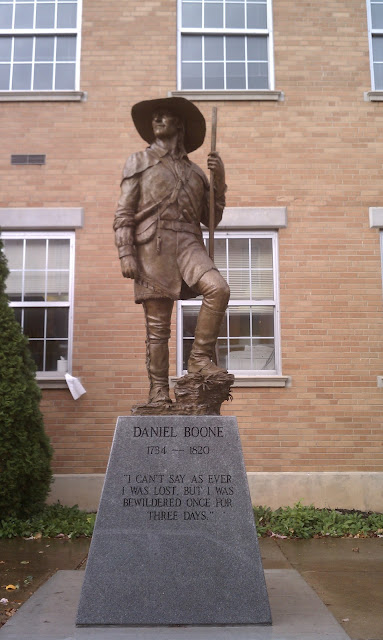 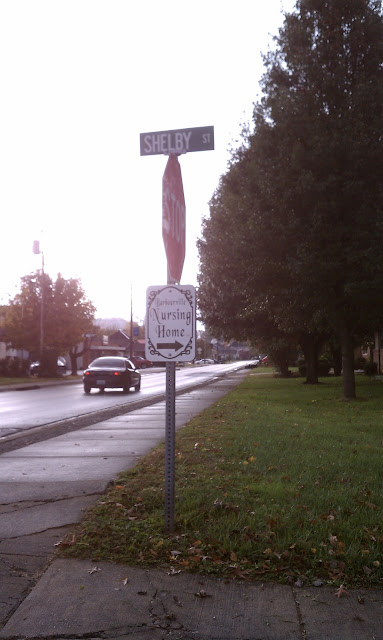 I followed the sign above to a nursing home in rural Kentucky and showed up unannounced at about 8am.  There I talked with a woman named Muriel, who told me all about what it was like to grow up on a farm in Kentucky in the 1940s.  Do you remember where you went on your first date?  Hers was picking blackberries. 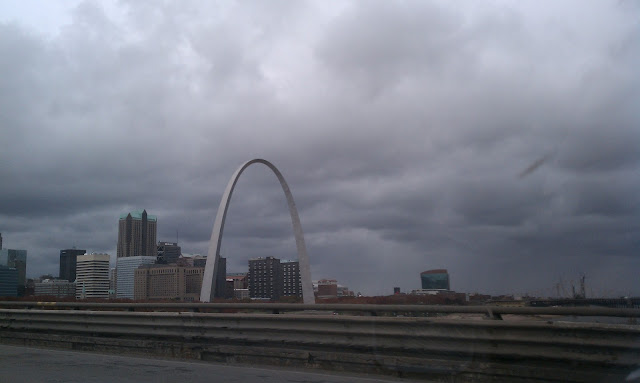 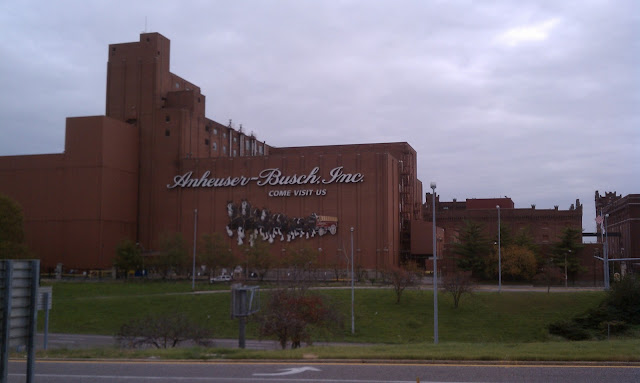 I stopped in Louisville, then it was on to St. Louis. 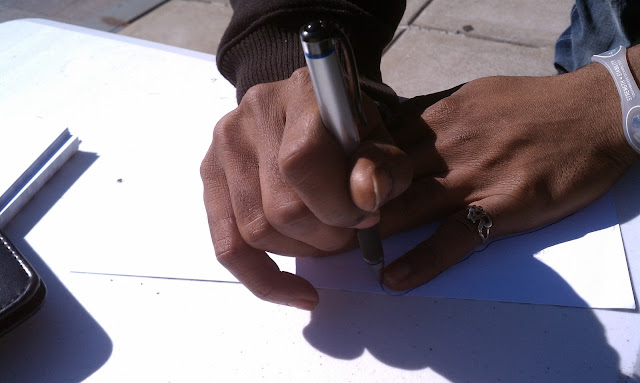 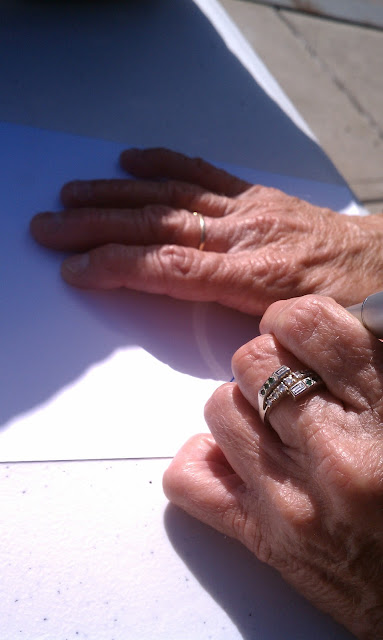 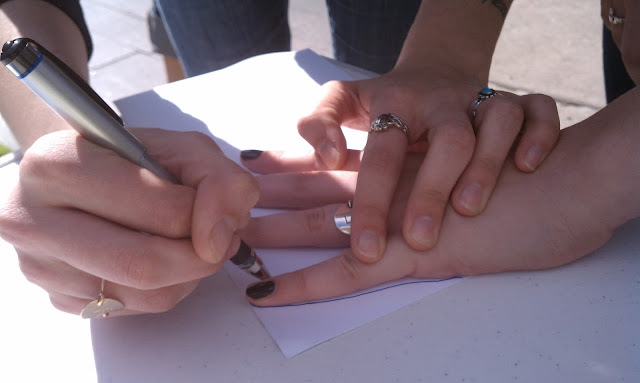 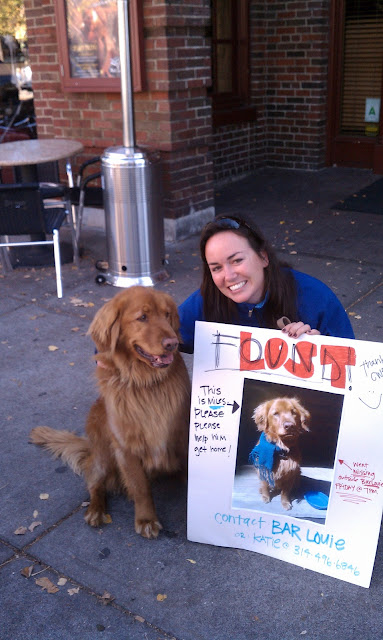 As I was packing up the table and the typewriter after a long day in St. Louis, I witnessed a woman being reunited with her lost dog.  I mean, I saw the exact moment it happened, right next to my friggin’ car!  She told me that people had been calling her all morning – not even people who’d found the dog, just people concerned and asking if they could help – and finally a man called and said he’d found the dog.  Everyone was crying and laughing and hugging…I mean, total strangers were hugging…I got pulled in….it was awesome.

(Side note: one of those random huggers gave me her Holiday Inn points so I could have a free place to stay that night…she just wrote down the number and gave me all the info right on the spot….if you’re out there reading this…thank you!) 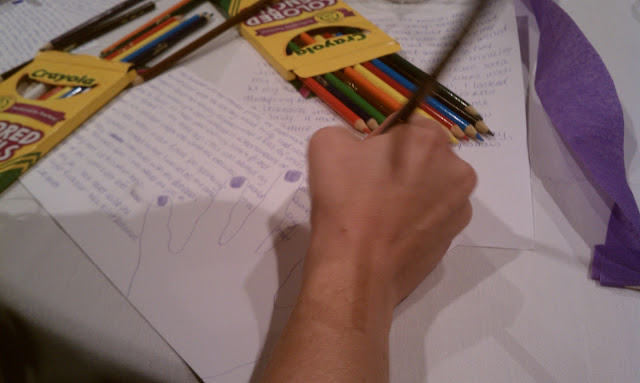 From St. Louis it was on to Springfield, Ill., where we had a fun workshop with the local chapter of the Alzheimer’s Association. 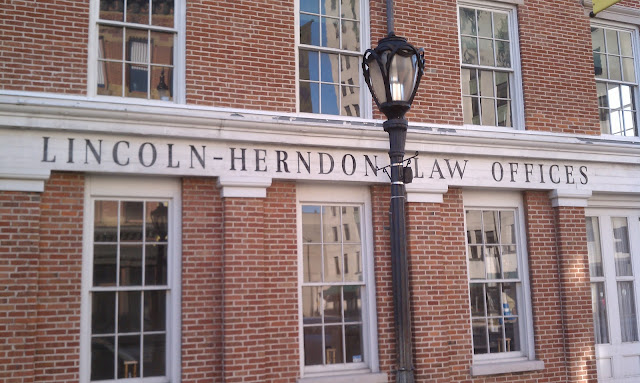 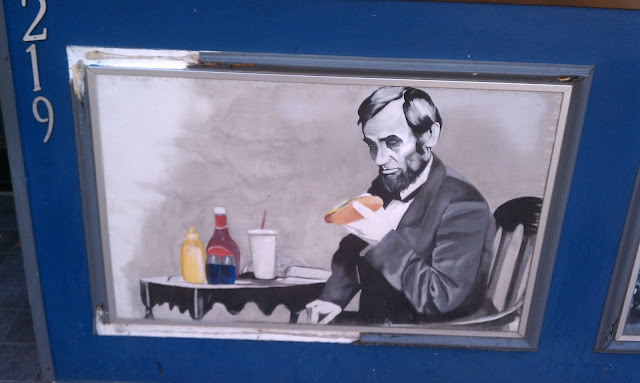 And now here I am in Dayton, Ohio with one final story. 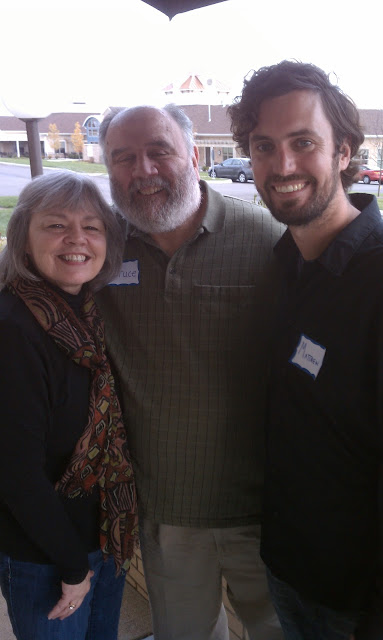 The man in the center there is Bruce.  I first met Bruce two years ago, when I came through Dayton on one of the earlier, proto SBYF tours.  He’s amazing.  The man could power your entire house just by stepping inside it; he just radiates warmth and positive energy.  You might be surprised to learn, as I was, that Bruce has Alzheimer’s. He was diagnosed at age 61.

I was standing at the front door, welcoming folks to our workshop, when I saw him coming through the parking lot.  I remembered immediately.  Bruce!  He had a walker now, which was different, but otherwise he looked exactly the same.  Bruce!

Then I began to worry.  Would he remember me?

He hobbled up and clasped my hand…I mean just swallowed my hand in his huge paw, and smiled.  “Hi,” he said.  “So nice to meet you.  I’m excited to hear about your grandfather.”

I won’t lie, I was a little sad, but I understood; it comes with the territory.

So a few minutes later we began the program, which usually starts with me reading the SBYF storybook.  I began reading and in the middle of the first paragraph – the whole “Have you ever really looked at the spaces between your fingers?” intro – when Bruce shouted out: “Wait a minute!  Weren’t you here a few years ago?”

He smiled, and everyone laughed.  “Okay, sorry for interrupting.”

And the workshop went on.  When it came time to “zoom in” on a memory for the postcard, Bruce wasn’t sure what he wanted to write, but finally came up with this: 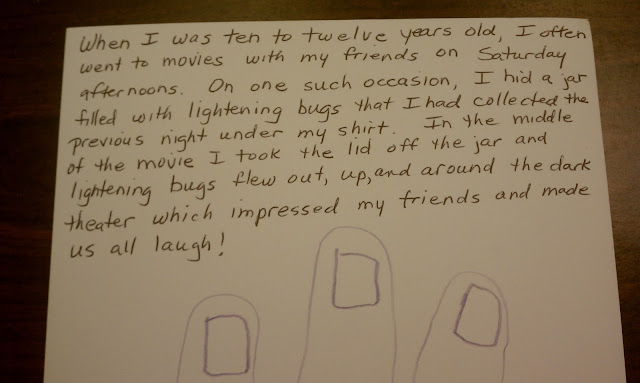 So I thought I’d end with that – that beautiful scene, which Bruce asked us to illustrate for him and preserve in our archive.

This is the opposite end of the spectrum from Alisha’s haunting memory (“Souls…”), but it just goes to show the incredible variance and potential of human experience.

UPDATE: 7/20/13 At one of our school workshops this year, we had a 4th grade Memory Artist create original artwork for the front of Bruce’s postcard, then sent it to him and his family. 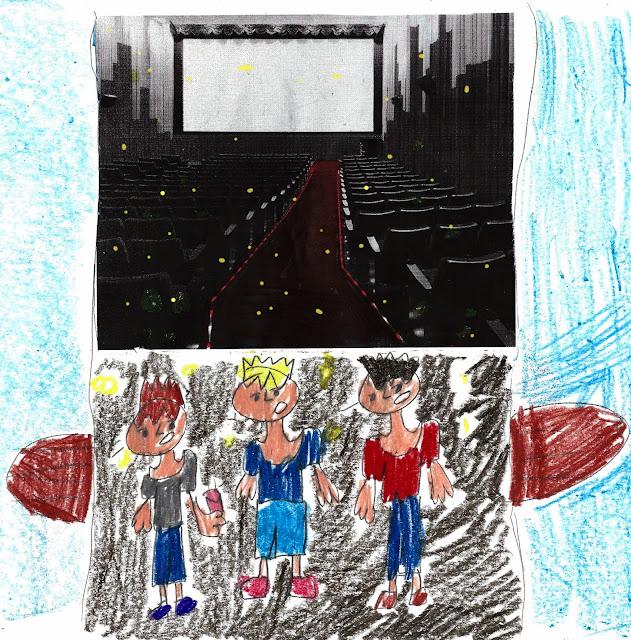