First of all, let me say how excited I am that my little brother, the same little brother who used to lick his fingers and eat sand like it was fun dip, IS GETTING MARRIED IN 8 DAYS! 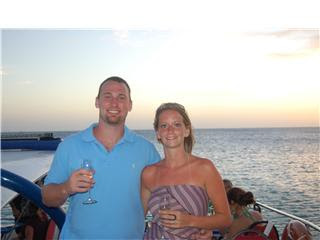 Now then, time is short, but let me see if I can share a few quick stories (many more pictures here). 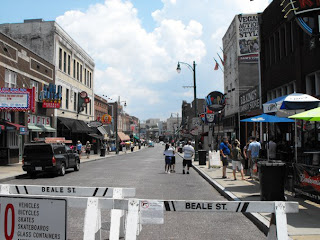 What you’re seeing here is the famous Beale St. in Memphis.  Nothing too crazy happened while we were here; I mention it mainly to clarify one of the greatest musical mysteries of all time.  You know that song “Walkin’ in Memphis” by Mark Cohn?  That line…”Walkin’ in Memphis with my feet ten feet of a ??????”  Yeah, it’s BEALE.  Beale St.  You’re welcome. 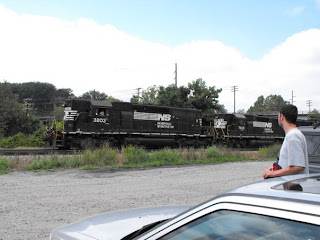 Now then, here we are just as the train is arriving in Asheville, North Carolina.  Since this project began I’ve visited hundreds of cities from coast to coast, and Asheville is definitely in the top 10.  It’s in western corner of the state, up in the Smoky Mts (if you ever go, be sure to hike up the waterfall trail at nearby Gorges State Park, it’s amazing…would have pictures but we did the hike in the rain).
Asheville’s done something cool: they’ve turned most of their abandoned industrail buildings/warehouses into working art studios. 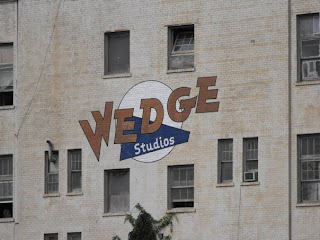 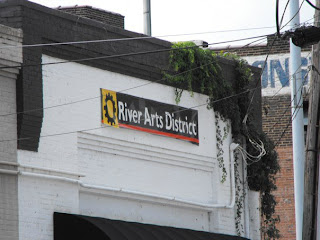 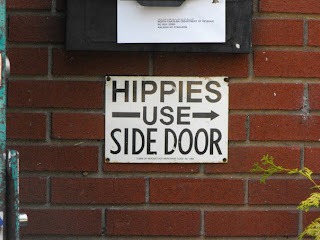 And so what could’ve been a gloomy postindustrial wasteland is now this vibrant, exciting community. 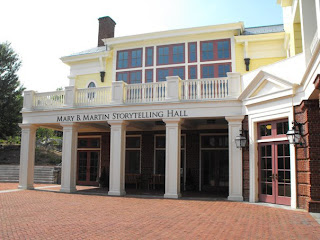 Moving northwest….this is the International Storytelling Center in Jonesborough, TN.  38 years ago a man named Jimmy Neil Smith heard a hilarious, well-told story on his car radio and decided he was going to throw a “storytelling festival” in his hometown.
“You’re going to throw a WHAT??” the townsfolk said.
A storytelling festival.  Like the old days, around a campfire.  When storytellers were kings.
Ignoring the naysayers, he bought a dingy old supermarket and transformed it into a magnificent storytelling hall.
And a few decades later he now attracts nearly 15,000 people to his hometown for the festival. 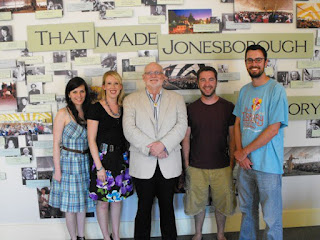 I got talking to Mr. Smith (above, center) and realized we had more in common than just our surname.  All this time I’ve been running around the country, passing out postcards to strangers, what I’ve really been saying is: “I bet you have a story to tell.  Tell me a little about where you’ve been, what you’ve learned…and mail it back to me.”
The handprints are just the linking device for all our stories.