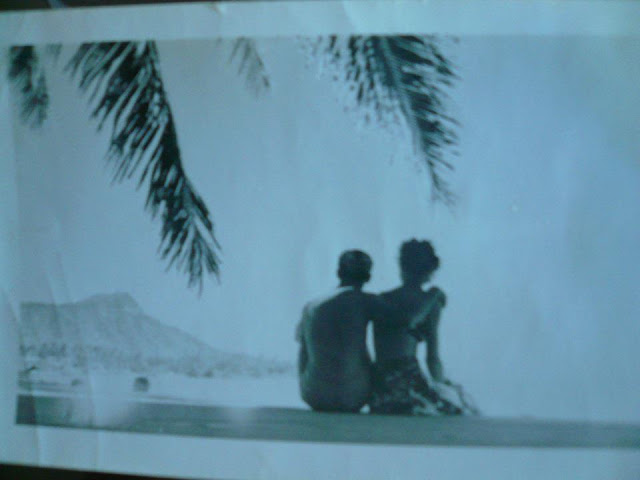 In a photo
two figures sit
overlooking paradise —
His knees are drawn to his chest,
bundled in the crook
of his left arm.
His other arm is draped around her,
leaving only an almond-shaped
sliver of space between them.

This is the story of how those two figures came to be in that moment together.

It begins on a cold winter morning in Brooklyn.  The row homes are covered in snow so that they look like one long, never-ending marble palace.  Beneath the snow Christmas bulbs glow coldly, faintly, outlining the doorways.  The only footprints in the snow belong to the baker, the baker’s son, and their dog.

A door opens and out steps Frank Marino.  He blows a plume of white fog into the air.  The bag on his shoulder is heavy; too heavy, he thinks.  It won’t be so cold where he’s going.

At the same time there is the sound of snapping sticks, now again, now again.  This is the sound of the frozen grass beneath Juanita Pfaff’s bare feet.  She looks off to the east, where the sun rises above the frozen cornfields.  Soon it will rise above the church steeple on Main Street.  It was too quiet in her house, too quiet to sleep.  Her feet have stopped burning and gone numb.  Behind her, the windows of the house are all boarded up.  She sighs.  They are leaving; her father promises that they will come back.

The Marinos left Italy in the 1920s, not long after a political journalist and war hero named Benito Mussolini was elected Prime Minister.  Rural life for the Marinos was hard.  Everything was scarce, it seemed, except for children.  Like many, they sailed for America dreaming vaguely of a better life, uncertain of what that better life would be, but certain it was out there in front of them.

The Pfaffs had come from Germany generations before.  Juanita’s father, Tony, was a big gregarious man who worked in a steel mill.  They settled in Logansport, Indiana and they did well for themselves.  They had a house of their own, which was more than many could say during The Depression.

After the Japanese bombed Pearl Harbor in 1941, Tony boarded that house up and moved his family to Hawaii, so that he could assist with the reconstruction.  America had provided well for his family; now it was his turn to give back.  He was hired as a shipfitter.  This was where he met a young, dark-haired Italian named Frank Marino, from Brooklyn, who had also come to do his part.  He liked the kid immediately.

He liked him so much, in fact, that he introduced him to his only daughter, Juanita.  Pearl Harbor at that time had a male to female ratio of what seemed like 1,000,000:1.  Frank Marino couldn’t believe his luck.  She was beautiful.

This was a bleak time. Martial Law was in effect; you couldn’t be out after dark or you risked being shot.  Everyone was waiting for the next Japanese attack.  Barbed wire ringed the white sand beaches.  Everyone was tense, on edge.

Three years later, in 1945, that that photo was taken of Frank and Juanita looking out at Diamond Head, in Oahu.  It doesn’t seem possible that war could exist in a world like that.  The photo was almost certainly posed.  They’d just been married and would soon head back to live with his parents, as many young couples did back then.  You were thankful if you had your own room.  Juanita would never have the problem of a quiet house for the rest of her life.

Frank went back to work in the shipyards, first in Brooklyn and later, when that closed, in Philadelphia.  They across lived across the river in South Jersey.

The days went by, and they grew older.  For the next generations, the war was a distant memory; photos in a history book; Tom Hanks in a bucket helmet.  In 1995 Juanita was diagnosed with Alzheimer’s disease, and was cared for at home by her loving husband, Frank.  Almost a decade later, Frank developed mild cognitive impairment that also developed into Alzheimer’s and passed away in 2010.  Their son Bob is now on the Board of the Alzheimer’s Association, Delaware Valley chapter, and co-chairs the PA Public Policy Coalition.  He advocates passionately in their memory.

In that photo, Frank and Juanita are still there together, his legs drawn up to his chest, hers hanging over the edge.  The camera man stands behind them, as we do, sixty years later, framing the scene.  Juanita peeks back, ever so briefly, and smiles.

A warm, tropical wind rustles the leaves above.  She leans into him.  Those cold mornings are long behind them; neither can believe there was a time when they didn’t know one another.   The future is uncertain but they are hopeful.