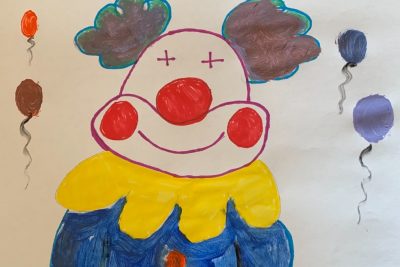 Balloons bouncing all over the house, kids were running around, and a mysterious clown invited himself to the birthday party.

Ann did not look happy. Her once cheerful smile quickly vanished. She was not expecting a clown to show up to her birthday party. She hates clowns. In fact, she almost peed her pants.

“Mom.. Can I talk to you for a second? What is this clown doing here?” Ann asked.

“I thought you liked clowns, hun and it is YOUR birthday. I want you to have the best birthday ever. My baby is finally turning eight, you’re growing up so fast,” her mom said with tears in her eyes.

“Yes, and eight does not mean I need a clown at my birthday party,” Ann exclaimed.

Ann became very angry, crossed her arms, and stomped all the way to the corner of the room to talk to her friends.

“Just look at him,” Ann said as she eyed the clown.

“I heard that one time a clown took this girl into the woods and did things,” Christine said.

“What kind of things?” Ann asked.

“I am not suppose to talk about it. But my sister told me if you ever do anything bad, a clown will come and get you,” Christine said as she stared at the ground.

The clown walked upstairs and looked back at Christine and Ann.

“Why does he have huge rainbow hair and big red shoes?” Christine asked.

“Maybe he is hiding something in there,” Ann said.

“Wait, have you seen my brother, Charlie? He was just here,” Christine asked.

“Oh no, you think the clown got him? You said if we ever do anything bad the clown will get us and Charlie is a bad kid,” Ann said.

As the clown quickly disappeared, Christine and Ann decided to follow him upstairs.

Ann followed right behind Christine. The two girls hid behind the wall and peeked over into the bedrooms.

“Oh no, Ann I’ve seen this in a movie before. We’re not suppose to go alone.” Christine said looking back at Ann.

As soon as she turned around, there he was. Six feet tall with a couple inches added from his big rainbow cotton candy hair. He had red all over his hands.

Ann was frozen with fear as her face went pale. Her legs trembled as if they were noodles.

“AHHHHHHHHHHHHH!” They screamed and ran as fast as they could down the stairs.

“What are you talking about Ann? Charlie is right here,” Her mom said.

“--Sorry kids, I was fixing my makeup,” the clown interrupted.