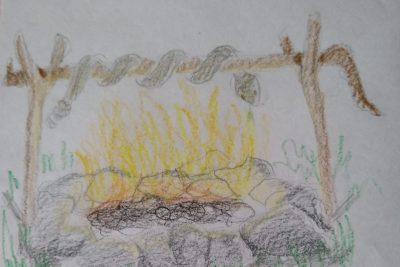 He rode slowly along the dusty mountain path, uncomfortably sweaty under the New Mexico sun. The only sounds were the clopping hooves of the twelve overburdened horses in his party, each of them carrying a scout wearing his olive green scout pants and tan uniform shirt adorned with colorful badges and pins. Strapped on behind each scout sits a 50 lb pack from which dangling pots and pans and cans of sunscreen and canteens clinked and clattered. It was the first day out, and he was looking forward to experiencing life on the trail at Philmont. He was thinking about all the excitement to come in the next ten days when he was startled out of his day dream by a loud, rattling hiss.

The heavyset ranger at the head of the party ordered everyone to stop where they were in a powerful voice. As he got off his horse, his large boots made a solid thud against the packed, dry dirt and a little cloud of dust rose up where he stood. He walked cautiously towards the brush on the side of the trail to discover the source of the rattling, the wide brim of his campaign hat shielding his face from view. Everyone watched, confused but intent, as the ranger slowly started to take off his belt. He re-buckled the belt, holding it in his hand now, and folded it in half so the big brass Philmont buckle swung from the end like a mace on a chain.

It only took two hits. The first one left the gray-brown snake dazed and barely moving, the second hit finished the job. The ranger picked up the dead rattler and put it in his bag.

“Now you know what we’re having for dinner tonight!”

Sure enough, when they arrived at the next camp site and got settled down for dinner, the ranger took the snake back out of his bag. Then he unsheathed the six-inch buck knife that hung from his belt, and showed them all how to skin and prepare rattle snake before cooking it over the fire and serving it for dinner.

I interviewed my former Scout Master David Seace from home over the phone. This is a story of his first night out on the trail at Philmont Scout Ranch when he was sixteen years old. This trip was an extremely important one in his childhood because it was the first time he ever did a High Adventure trip.