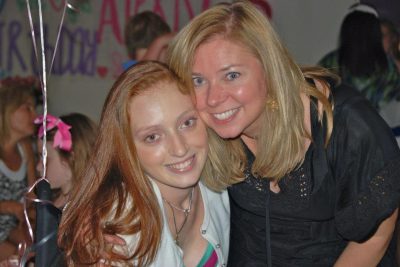 How do I tell my 15-year-old daughter that she may never walk again?  That all of her years of playing sports and the things she identified with the most are done.  How is it possible that as her mother I wasn’t able to protect her from this – and now she will live with a deformity that will be noticeable forever– it was my job to protect.  These were all thoughts running through Lynn’s mind as she sat waiting for her daughter to wake up from surgery.  It was the 18th surgery of 28 total, but this one was different.  This was the surgery where critical muscles were removed from the leg, muscles needed for standing and walking.  The doctors said removing the muscles were necessary as the infection was spreading.  In her logical mind Lynn knew it was the right thing and that saving her life was the only thing she should concern her.  But in that moment, when the bustling hospital stood still, when the light from the window hit her daughter’s gaunt face with a glow that felt like it was from the heavens, when it seemed as though the rest of the world had faded away and it was just the two of them, how could she find the words to tell her?  There was a deep sadness like no other that rushed over her as she struggled with the realization of how different life would be for this child who fell asleep not knowing what the future would hold.  She practiced what she would say, how she would say it but the words were lost.  Her daughter awakened and immediately asked why she was crying.

Lynn still can’t recall exactly how she told her but what she does remember is the response she received.  It was an unexpected acceptance, a reminder that she was alive and was loved and that the rest could be figured out.  It turns out the things a 15 year-old values the most in life are not always what you’d expect, but as a mother they’re what you’d hope they’d be.