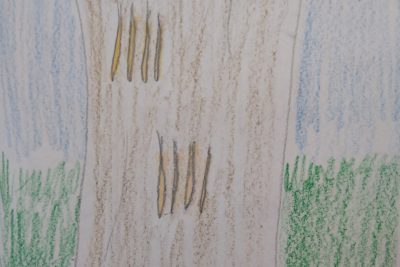 Scrawny little Dave was awoken from his sleep by all sorts of cluttering and banging and growling not far from where he slept. The sound had woken up his tent partner, Rich, too.

“What the hell is that??” He whispered to his tent partner, unashamed of the fear in his voice.

“Didn’t the ranger say there were bears around here?” His partner pondered back.

“Well, yeah, but we put all our stuff way up in that tree. That can’t be a bear out there!”

“Well there’s no way I’m going out there to find out. Not for a million dollars. Let’s just hope it goes away soon.”

Dave pulled his sleeping bag all the way up over his head to try and block out the sounds of whatever was out there, but the sleeping bag couldn’t keep his imagination from filling his mind with terrifying thoughts. Eventually the noise subsided, and he was able to get some amount of sleep, scared as he was.

The next morning, the boys got up and walked out of their tents to find their campsite completely trashed. All of their plastic bags were shredded to pieces and the dry food strewn all over the ground. From the tree hung what remained of their “bear bag”; A canvas tarp torn almost completely in half, twenty feet in the air. As Dave surveyed the scene, he was awestruck by the damage the bear had done. But not the damage to the food or their site. All the way up the tree from which the bear bag hung, there were deep grooves where five enormous claws had dug into the wood. He could follow each of the bear’s paws as it scaled that tree in the night, and found it hard to imagine a creature of that size with so much dexterity.