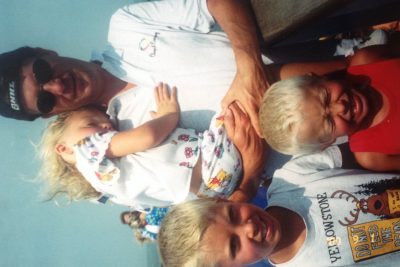 As Jodi looked out over the lighthouse railing, her sunglasses showed the reflection of the endless Atlantic Ocean. She smiled, although it was painful to move her facial muscles from the sunburn she received yesterday.

“When I was in the Marines…” Jodi heard her father’s booming voice over the ocean gusts of wind as he told stories to his own three grandchildren. Post-retirement he became a tour guide for the Cape May Lighthouse. Between telling stories about his adventures growing up in Kensington, Marine life, fishing, or raising a family of five with his wife, his “job” as a tour guide allowed him to become a storyteller.

“Hey Dad can you take a picture before we leave?” Jodi handed over her 2009 Kodak digital camera to her father as she tried to arrange her three fatigued children for a picture with the sunset over the ocean as they stood against the lighthouse railings. “I’m hot!!!” whined her eleven year old son. Jodi rolled her eyes and said, “One picture and we can go out to dinner at The Crab Trap. Look at Poppop and smile. He’s so happy we came here today.” Jodi’s father looked up when hearing this statement and winked at her. Although Jodi’s father fumbled around for a few minutes, a beautiful photo of the family was captured.

Just as the sun fully set, Jodi let her expert father lead her family all the way down one hundred ninety-nine steps from the top of the lighthouse to the bottom. Not just steps, rusty steps. “Dad, isn’t this a little dangerous for you to do alone every day?” He chuckled and said, “I’m retired for a reason. Also Jodi, I think your promise of dinner really worked on the kids.” Not one complaint was heard from the children, even as they trudged down the narrow stairwell in dim lighting, because the smell of fresh seafood from The Crab Trap was keeping their minds occupied.