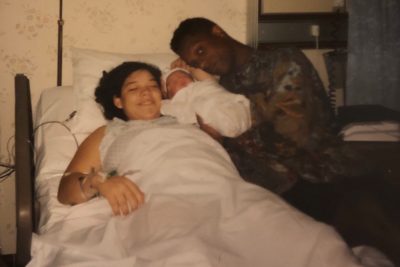 Today’s the day; I have anticipated this day for nine months, nine long months. It was June 28th and my son was coming.

My girlfriend’s already there, prepping for our son. She had been there for hours, in pain, waiting for my arrival. I know she has been asking for me, but it took a long time to build up the courage to come. “She has no one else there for her, you have to step up. You have to.”

At age 22, under the law I may be considered an adult, but I know I have a long list of growing up to do. I’m still finding myself, drinking, having fun, and living life, but if now isn’t the time to grow up, when will it be?

As I slowly approached the fourth floor, I asked the receptionist for instructions and information, “Excuse me, my girlfriend is having a baby. They said she was on this floor. Where do I go?” She pointed me toward a nurse, who escorted me to the large waiting room, handed me a smock to change into, and officially let me know my girlfriend needed a C-Section.

After I had changed, I needed more information. “I’m all changed and ready to head back to the room,” I said with excitement. Even though, I know I am young, I know I need to shape up and be there for her, so I was determined to head back as soon as I can.

But then, the heartbreak came. “You can wait right here Mr. Snead,” I am brought to a small, more intimate room, where I was left to do nothing, but stare at the light blue walls, all alone, reminding me of my son. Faster than, I could figure out why I didn’t get brought the to the room, where girlfriend was giving birth to me son, I was told, it was over and my son had been born.

Finally, I am then escorted to the room, I took a deep breathe and entered. There she was holding my son, more beautiful than ever. “We did it, you did it.” It was my turn, still my frustration for not being able to be in the room with her, I know I have to calm down, she needs me. I grab my son, and holding my son, none of it even mattered anymore.

I interviewed Troy Snead, my father, over Facetime, where he was sitting in his mancave back in Bethlehem, reminiscing.  Out of all his life events, he let me know that is he had to chose to go back in time to any event of his life, he would go back to the first day his child was born. He chose this moment because he was very young & immature, and thinking back he believed the doctors sensed that. He feels that the doctors tried to “get him out of the way,” by putting him in a small waiting room, rather them inviting him in the the room. If he could go back, he would prepare and prove he was ready to be in that room for his woman.