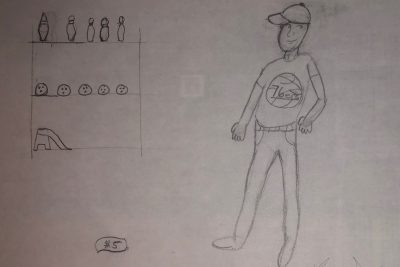 It had been a long day of work, but it was Troy’s first day on the job, and he needed to prove himself. The bosses name was Rob. Rob was a tall, old, white male, who, let’s just say had a very distinct opinion about teenage African American boys, so even though Troy had a glowing recommendation from one of his best friends, Phil, who had been working there for years now, he was still going to be tested.

As the day was wrapping up, Phil spoke to Troy, “I’m glad you got hired, but remember what I told you about Rob. He likes to leave some valuables behind as a test, so watch out.”

They were in the back of the bowling alley, cleaning up and getting ready to close when Rob dismissed himself, “I’m gonna stop by my office and then head out boys, see you tomorrow.” Rob starts walking away, as Phil went ahead and followed him out, “bye Troy!”

Then, right away, Troy noticed it, just as Phil had warned Troy, a five dollar bill hanging out on the floor in the area Rob worked in. As he picked up the five dollar bill and headed to Rob’s office to return the money, he quickly became frustrated by the fact his boss even felt the need to test him. He couldn’t help but to assume it was because of his race. In that moment, Troy had a lot of things going on in his head and many emotions running through his body, but he knew he needed to continue his next step of returning the money.

I interviewed Troy over Facetime. This moment was the first day and the most memorable day of his first job and has stuck with him to this day.