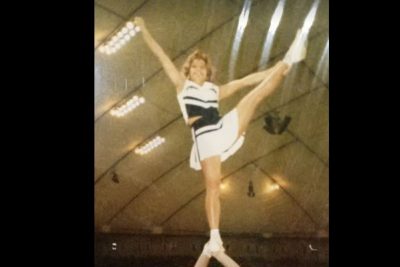 One. Bounce. Two. Bounce. Three. JUMP. The strong hands Pushed into Karen’s hips and propelled her into the air. She focussed keeping her core tight and gaze forward. Teeth bared in a peppy approximation of a smile. Her heels hit the palms of the girl below her. She tried not to move but also look relaxed and like she was having a good time. She took three deep breaths got comfortable on her new perch and started her cheer.

“We are!” she shouted

The rush of controlling a group of people so thoroughly sent a drip of adrenaline down Karen’s spine. Nothing felt quite like this. Now all she had to do was get down. She put her feet together and steadied herself for the descent.

She fell through the air with two hands on her waist. Karen hit the ground. Something felt wrong.

She heard a pop.

Karen woke up on a trainer table. With ice on her ankle. The trainer seemed like he was underwater as he explained that the only thing they could give her were ice, ibuprofen, and crutches.

And that was the thought that consumed her consciousness for the remainder of the night.