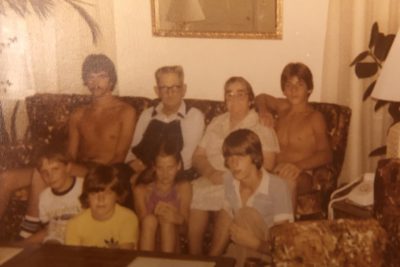 Sitting on his recliner in front of the black and white television Jerry Bright was watching the weather which was calling for a terrible thunderstorm in Darby, Pennsylvania. However, Jerry largely disregarded the warnings as this was the first major storm since moving to Pennsylvania from his farm in Kentucky, and he wasn’t completely aware of his surroundings and how they may be impacted by a severe storm. With beer in hand Jerry got up from his recliner to change the channel to a Westerner at the time. With the thunderstorm rumbling in the background and a crack of lightning the rain started to come down in buckets on top of Jerry’s small rowhome. The thunderstorm pounding down on the house began to drown out the Westerner playing on the television, and it was at his point that Jerry stood up from his recliner and saw that his whole backyard was submerged underwater. Jerry tossed on his boots and jacket and ran outside to see that the creek that was 20 yards back from the house was freely flowing into their backyard and then further out onto the unpaved road, turning it into a steady stream of muddy water. After observing the flood taking place around him for a short time Jerry suddenly thought to himself “Oh shit, the basement”, and proceeded to rush back inside, open the basement door, climb down the steps and into the dim, musky basement that was now currently submerged in two feet of water, with the water level steadily rising. Jerry called to his six children and his wife to come down to the basement and help to try and salvage anything from the flood. Jerry called for his eldest children, Theresa and Tim, to help him try and salvage anything from furniture to toys from the basement, but he did not want to get their clothes ruined so they quickly switched into their bathing suits and then slowly waded through the basement, picking up soaked blankets, chairs, and toys that were strewn across the flooded basement. With water pouring in from every crack in the walls and windows, the three scavengers returned to the dryness of the stairs where they looked down into the basement, helpless at slowing down the flood until the storm subsides, which it would not do for another hour. With nothing to do except wait out the storm and see how much damage it does, Jerry went back upstairs and turned the television back on until the storm passed. Once the rain subsided, Jerry went back to go downstairs, only to make it halfway down the staircase where the water prevented him from going any further. If he were to stand on the floor of his basement, the water would have gone up to his chest. The only thing he could think to do was to go back upstairs and wait for the water to drain from his basement on its own.