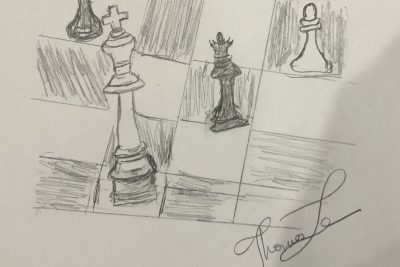 “Hmm…,” Nick’s opponent moans as he analyzes the chess board in front of him.

Nick was part of his high school’s chess team, and was currently facing off against Easton, his school’s biggest rival. The room was quiet, only being disturbed by the occasional moans and groans of the players as they strategized.

‘This is so boring,’ Nick thought to himself as he blankly stared at the chess pieces in front of him. ‘I can’t believe people do this for fun. It’s basically 40 minutes of staring at a plastic board with toys on it. It almost makes me want to quit. Almost…,’ Nick thinks to himself. Just then, he heard a commotion coming from his right.

“Did you know that India has its own bill of rights for cows?” Tommy, Nick’s teammate, asks his disgruntled opponent. “Yeah, that’s weird, but I bet you didn’t know that butterflies taste with their feet!” He exclaims.

“I’m trying to concentrate. Can you please stop talking to me?” Tommy’s opponent asks angrily.

“Oh ok,” Tommy says as he turns to Nick. “Hey Nick! My new friend doesn’t want to talk to me anymore, so I’m going to talk to you instead!” Tommy yells.

Nick smiles. ‘This…is the reason why I love playing chess,’ Nick thinks to himself as he turns towards Tommy.

“Your new friend didn’t appreciate your random facts?! That’s a bummer! Well I appreciate them! Can you tell me some?!” Nick loudly asks to Tommy.

“Can you guys just shut up and play?!” Tommy’s opponent yells out of frustration. Tommy, shocked, locks eyes with Nick. The room is quiet as tensions reach an all time high. Suddenly, Tommy and Nick begin to burst out laughing.

“Hey Tommy! They don’t want us talking anymore, so do you want to listen to some music instead?” Nick asks to Tommy.

“Absolutely. But turn the volume up high. I want to make sure I hear everything perfectly,” Tommy says as he glares at his opponent.

Nick, hearing this, whips out his phone, and begins to play an ear deafening version of Faded by Alan Walker. The song fills the room, making the other players have a difficult time concentrating.

“Hey! Maybe if you guys stopped screwing around, you’d be winning right now!” Tommy’s opponent yells as he turns towards him. “I’m gonna enjoy seeing your face after I defeat you.”

“Wow! That’s funny that you say that, because you just lost,” Tommy says sarcastically, as he moves his queen. “Checkmate.”

Tommy’s opponent, furious, storms off. Nick, seeing Tommy win, quickly checkmates his opponent, and meets up with him.

Just before they leave the room, however, Tommy yells, “Maybe if you focused, you would’ve beaten me!”

“No way……” Nick says, shocked by what he was seeing.

Tommy laid on the floor, his nose broken and bleeding, while his opponent stood overtop of him.