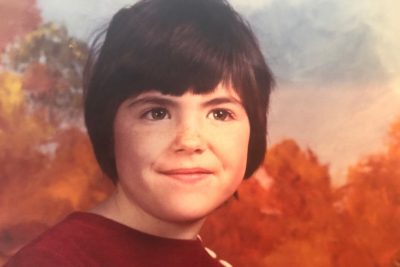 It was December 17, 1972. Five year old Michele Grant woke up with an immediate smile on her face. She knew exactly what day it was. It was her birthday. She rolled over next to her two older sisters, waiting for them to open their eyes and say those two magical words to her.

Her second oldest sister, Lena, woke up first and gave her the biggest hug. “Happy birthday Michele!” she exclaimed. Lena was only a year older than Michele, so they got along very well. They could smell the birthday pancakes seeping through the crack of their bedroom door. It was time to feast.

She ran down the stairs with Lena and sat right down at the breakfast table with the whole family. It was all eight kids, her Mother, Mary, and her Father, Charlie. They all smiled at Michele and took turns wishing  her a happy birthday. Michele was a very shy child so when all the attention was on her, her face would always get as red as a tomato.

Her mother was making pancakes, bacon, scrapple, and toast for the special occasion. It was way better than the usual cereal and oatmeal. Michele was happy for the pancakes, but what she really wanted was her special gift. In a household of eight kids, plus an uncle and two parents, money was a little tight. So, on every child’s birthday, they would get five dollars and get to walk to the local Kmart down the street.

Michele shoved down her pancakes and quickly ran over to her dad asking, “I finished breakfast. Can I please have my five dollars?” Her dad handed her that little piece of paper and she was on her way.

Michele lived in 734 Ivyland Rd in Warminster, Pennsylvania. It was a trusting neighborhood where everyone knew and looked out for each other.  Michele, Lena and their brother Kevin grabbed their winter jackets and went on their way.

As they arrived at the Kmart, they raced down each aisle picking up items and asking Michele, “What about this barbie? Or what about these clackers?” but nothing seemed to stick out. This was her one chance a year to buy something, so she had to get the perfect present. And, she took it very seriously.

After 20 aisles of going back and forth, she had done it. Out of the corner of her eye, she saw it. A big barbie head. This was perfect. She always dreamed of becoming a hairdresser. Michele was a very timid girl, so usually any social interaction with a stranger would freak her out and cause her to close up like a clam. But, this time she walked proudly up to that register with the biggest smile on her face as she set the barbie down. As she handed the cashier the barbie she thought, “This is the best birthday ever!”