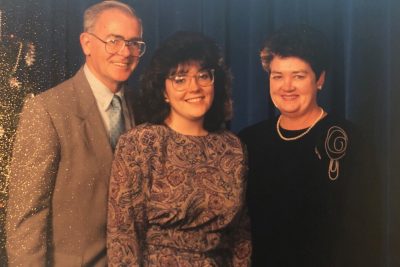 “Okay girls. Let’s have a good game out there and don’t forget to have fun!” Michele’s father Charlie said to the basketball team. Michele was 12 years old and at this point in her life he had attempted to play a variety of sports. Key word being attempted. She tried soccer, volleyball, swimming, and of course basketball. She was not the most athletic out of the eight children that is for sure, but she tried her absolute hardest.

It was one of the last games of the season and Michele had not made one basket. Her father saw her frustration and her commitment to never giving up. Even when she wanted to so badly. It was the last five minutes of the game and Charlie saw the underlying sadness on Michele’s face. He knew what he had to do. He quickly yelled, “Ref, time out!” He made a snap decision to motion a play to pass the ball to Michele. All the girls looked around in disbelief. They knew she had never gotten the ball before and honestly didn’t know if she could dribble. But, they all loved Michele and wanted her to succeed, so they agreed. “Okay, girls! Shannon you are going to fake right and dribble up the court. As you get to the middle of the court, they’ll try to double team you. Right before they do, throw it to Michele on the three point line. Michele, you are going to go for it and shoot. Does that sound good?” Michele was in shock. “Holy shit, will I  finally going to make a basket?” She looked to the sidelines and saw her whole family waving and smiling. The nerves began to kick in.

The whistle blew, and it began. The play was going just as planned, until the other team stole the ball and dribbled to the other end. All the girls ran down the court, and somehow caught up with the other team. Minutes went by of back and forth and finally, Michele’s team got the ball. They quickly passed it to her and without thinking, she threw it up to the basket. It rolled around the rim and finally, went in! Michele smiled with pure happiness and then looked around to receive her praise. But, everyone just looked confused. She looked at the other team who was cheering and finally pieced it together. She scored on the wrong basket! Her shoulders sank, and her face became red as a tomato. She blew it.

Needless to say, Michele never played basketball after that game. But, after one closed door, there’s always an opened window. Michele then tried different sports and such to see where her talents lie. She tried soccer, volleyball, and softball. After finding out she was not very athletic in any way, she somehow find her skills in board games. Now, she is always jumping for joy whenever we have a game night and the whole family knows if Michele is playing, she is always winning!