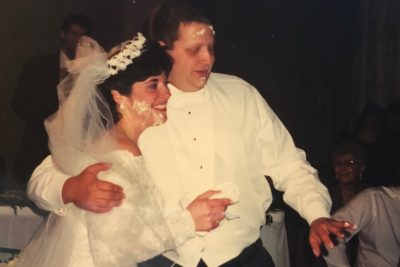 “Beep! Beep! Beep!” Michele rolled over and saw the dreaded numbers 6:30 am. She had to get up for her first day of work. A day she had been anticipating for days. And, now that it was finally here, she didn’t know what to feel. She quickly got ready and headed on her way.

Michele was 21 years old, fresh out of King’s College, and knew her college days of midday naps were behind her. She was starting at a company called Savin in King of Prussia where she would be working in the sales department. After giving herself a much needed pep talk, she walked through those double doors, and put on her game face.

She walked around and introduced herself to her coworkers, something young, shy Michele would never dream of doing. One of her coworkers she met was named Dan. She thought he was cute and even from them first meeting, he instantly made her laugh.  As the weeks went by, and countless happy hours with her coworkers, they all got very close, especially Michele and Dan. She would always be on the phone talking to a customer, and he would sneakily pop his head over the cubicle yelling Michele’s favorite punchline, “I said meow man!” She would instantly break into laughter and have to put her customer on hold. She would flip him off, but always with a smile that showed she was never truly mad.

One day, she was telling Dan how she and her coworker Christine were going to happy hour at the Bent Elbow after work if he wanted to join them. Dan had a second job working at a local factory at night, so he had to pass. But he told her if she needed anything don’t hesitate to call him.

As the night went on, a man started talking to Michele. He was a tall man with glasses and a mustache that would make anyone cringe. He asked Michele, “What are you doing after this? Why don’t you ditch your friend and have one drink at my place?”  She politely said, “No, thanks. I’m good here,” but he would not stop. So, she stepped outside to the nearest payphone and called Dan to ask him to help her. In no time, Dan and his friend Anthony arrived to save the day. Dan walked in and without even saying hi walked straight over to Michele and put his arm around her. “What have you been saying to my girl?” He said. The creepy man instantly shrunk down and cowardly said, “Nothing. I was just asking her about her friend.” Then, with his tails between his legs, he scurried away. Michele looked at a Dan with a smile and said, “Thank you.” They ended up leaving the bar and all sat in the car listening to music and laughing the whole night. One specific song, Bruce Springsteen Born To Run came on and they both belt out every lyric. With a smile on each others faces, Dan and Michele both looked into each other's eyes and knew they had found their match. And, the rest is history.