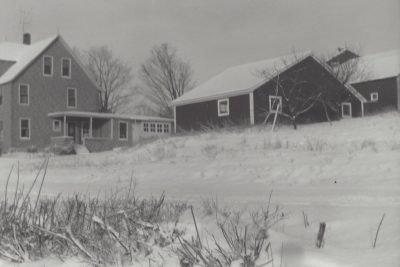 Connie and older brother Neil watched their father take the jar out to the patio on the day they had been waiting for since he put the spider into it with its egg sac. It was a black widow spider which Connie could identify by the red bow on its belly, and she knew never to touch in the garden .

The children's father proceeded to lay down near the jar, on his side. He was always showing them cool stuff around the farm. He was growing a beard, always tired and patient. There was a barn with a horse in it the kids were taking care of. Their father says "A lot about learning to take care of others is a part of growing up", as Connie and Neil watched the jar with eyes too big for their little heads.

The siblings gathered around the jar and put their noses to it in turn, looking for the movement their father said to look for in the egg sac, how you could see it was time by shadows crossing.

The kids became more engaged when the babies started to come out, just like their father said. The babies were smaller than anything, and Connie thought it was strange that the big mother spider wasn't even paying attention.

The babies were making their way through the air holes punched in the lid. The kids intently stared as their father put a small twig into an air hole, then watching the spider babies crawl up it. Connie and Neil excitedly monitor the spider babies up until their father insisted it was bedtime much later that night.

Ten years after moving out of the farmhouse, Connie receives a call from a chuckling Neil: “Do you remember if you were nervous with all those poison spiders radiating from the jar? Do you remember that we didn’t have any insect spray because we’d just moved out there but he had a can of hairspray and that’s what he sprayed on them, just as they were getting away? Why did we have hairspray?!”