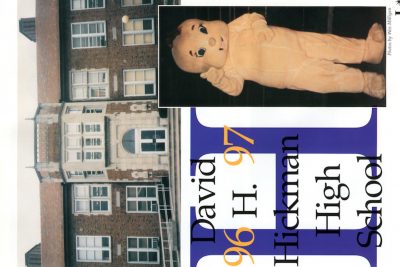 The high school rivalry between Hickman and Rockbridge was just about the most intense affair the sleepy town of Columbia, Missouri ever saw. Columbia, being a small town two hours outside of St. Louis, saw high school football as a sacred practice. Hickman’s football team was incredible; Rockbridge had a team. Chrysti always found it funny how Rockbridge was the rich kids’ school but they couldn’t buy their way into the higher division that Hickman, her school, always dominated. Even though they were in different divisions, someone somewhere made the decision that this year they would play each other for the first time in living memory, in an epic showdown to end all showdowns. The winner would walk away with bragging rights that would last a generation - the stakes couldn’t be higher.

The entire event officially spread across four days, with the actual game scheduled for Friday. Pep rallies and school spirit days were slated to start on Tuesday, but as Chrysti pulled up to Hickman’s campus on that crisp autumn Monday, she could see that certain members of the student body had kicked off the festivities a day early. Four burly junior boys were doing donuts in the parking lot inside Jonny’s beater car, which they’d salvaged from the junkyard his dad owned, purple and gold flags flying out the back windows. Girls were congregating on the front steps of Purple Hall, discussing outfit choices for the big night and the merits of buying versus making their own pom-poms. Chrysti breezed past the commotion in the entrance, but classes weren’t much more focused.

The next two weeks were more of the same; buzzing anticipation in the air, increasingly rowdy teenagers on every street corner, taunting and pranks galore. If an object mattered to the students at the opposing school and could be stolen, it was. That went for signs, clothes, mascot costumes, football equipment, and even Jonny’s car. It was quickly stolen back, after Jonny and company doled out some swift justice on the Rockbridge thieves.

Hickman emerged victorious in the prank war, which turned out to be foreshadowing of the game itself. The deafening roar of the crowds during and after the game left Chrysti’s ears ringing for days. Screaming along with the plays left her voiceless the next day, and she wasn’t alone. No one really focused on anything but the celebrations for a week, and the collective energy from the rivalry finally being brought to the field never entirely dissipated. The Hickman win was referenced in one in every three yearbook quotes that year. The Hickman v. Rockbridge game is an annual tradition now, and nearly results in the town being burned down every year. But no game after was ever quite as satisfying as the first one.