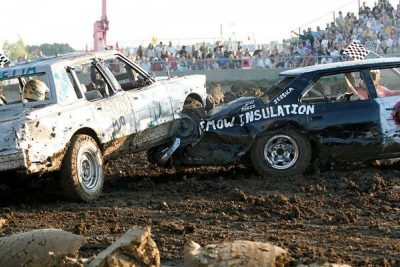 The demolition derby was Chrysti’s favorite. Every year, she looked forward to the one day at the county fairgrounds where the kids were allowed to unleash their fury on a handful of poor, unsuspecting jalopies. Best day of the year, hands down.

Chrysti and her siblings woke up on derby day practically vibrating from the excitement of it all. They bounded downstairs, shoveled down breakfast, and piled in the back of Dad’s beat-up Chevy. As the pickup bounced down the cracked country backroads, the air heavy and humid; summer in Missouri meant dampness, from the collars of Walmart t-shirts to the roadside pools of stagnant water fostering a new generation of mosquitoes. It also meant mud, a critical element of the derby. Chrysti leaned her head over the side of the truck bed to check that the wheels were spitting up a satisfactory amount of sludge - she knew how to interpret a fine layer of grime on the truck in order to determine whether the derby field would need more water to reach the ideal level of muddiness. The roads were wet enough that Chrysti knew the troops would have time to roam the fair a bit before showtime.

And roam they did. Chrysti spotted at least four other trucks and bikes loaded with kids who manned the derby disperse into the fairgrounds. A handful headed into the midway, a few sprinting toward the lines for the rickety wooden coasters, one older sister dragging a chain of toddlers onto the carousel. After an hour or two, a steady stream of wild-eyed children came out of the woodwork and congregated at the edge of the derby’s loading area. Seven rusty old beaters awaited them. The kids were armed with baseball bats, their dads’ sledgehammers, and a mission: to relieve the cars of any glass that could hurt the drivers and ruin the fun of the derby.

Two neighborhood boys had gotten to the lot first, and were already beating up a boxy beige station wagon by the time she had picked up her bat and set her sights on a graffitied red sedan. She wasted no more time - smash! The feeling of connecting the bat to the driver’s side mirror never disappointed. The other kids swarmed, eager for their turns at parent-sanctioned destruction. They took out the rear windows and lights, while Chrysti circled around to the windshield for the finale. She climbed up on the hood and took one triumphant stomp on the glass, shattering it onto the front seats quite elegantly, if she did say so herself.

Just as quickly as the havoc started, it was over. The glass was cleared from the cars; the job was done. The kids clamored on top of the cars to roughhouse until various authority figures shooed them off so their handiwork could be driven into the derby. Chrysti perched on the metal bars separating the bleachers from the field; it was her favorite place to watch the sunset behind her favorite event.