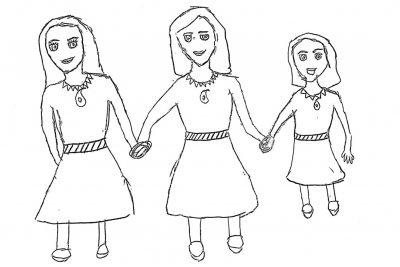 Chomki squinted her eyes as the heat from the endless sun shone on the city of Chittagong, rays of the sun caused drops of sweat to pour from her head. The endless bodies pushing past her wasn’t making this better. Moving past the crowd of people in this busy city seemed world’s different than the placid, serene atmosphere of the village.

Merchants and shops closed their doors and set up shop in the streets, they were all calling her to try their new products, clothes, and foods. She wanted them all. Other children ran alongside their mothers, she had never seen such liveliness.

“Be sure to hold each other’s hands and not let go.” her mother chided sternly.

As she was transformed into a new world, Chomki could smell the fragrant mangoes as merchants cut them open for the smell to permeate the small spaces in the air. Cars rushed past each other on the nearby streets, screams of the bustling city was enough for her to get lost in her own world. It took her several moments to realize that she was holding one less hand and Pompey was gone.

Panic ensued as the surrounding atmosphere suddenly blurred out, and Chomki was back to reality. Where was Pompey? How could she have let this happen? Did her mother notice? Fumbling with her tracks, Chomki pushed her feet to trace backwards as her heart sank below her chest. Pushing past the mass of bodies, Chomki ran to find smaller figures like her. Yet, her eyes refused to focus as she realized tears clouded her vision.

“Mom, Uncle, I can’t find Pompey. She was with me just a moment ago I swear, but we just lost her becau-” Chomki stuttered words incoherently as her uncle sprang into action.

“Here, I’ll go find her! Stay here Chomki!” her uncle shouted while running away, already down the street.

As the minutes dragged by, Chomki and everyone stood distraught, in utter disbelief. Chomki ran through the last moments of seeing her sister. “How could I lose her?” she cried, violently weeping as her family attempted to comfort her. Ten mintues passed. No sight of her uncle or Pompey. Chomki could hear the beating of the drums that introduced the performers, the only thing beating louder was her heart. Sounds blurred into oblivion as she was anxiously waiting for any news.

And there he was, with Pompey on his shoulders, carrying her above the crowd so everyone could see. Her mother took Pompey in her arms once again.

“That’s enough excitement for today,” her mother sighed, finally allowing her lungs to release her breath.