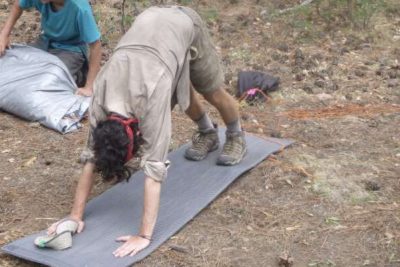 The blistering heat of the sun was slowly roasting Luca's skin. Salty beads of sweat giving much needed relief to his upper back. He's in the lower half of a line of six people marching through the Colorado wilderness, looking for the next market to set camp for the night. On an average day they walk at least 10 - 20 miles with all their items and rations. This technique of rehabilitation is meant to rewire their brains to focus prioritize survival and not euphoria. It's a grueling circuit that typically lasts around a month.

During these walks Luca zones out and starts daydreaming while marching. His body has been on autopilot for the last week, now adapted to the extreme conditions and constant marching. It's been three weeks of the camp and he's been through the works. At this stage of psychological warfare, it's not even about the drugs, he just wants normalcy again. Marching around in the woods with 4 other struggling kids and 1 chaperone  would drive anybody insane.

After the routine 6 hours or so of walking for the day, the group found a flat and relatively clean patch of land and set camp for the night. There are no electronics so light is to be made by the students using traditional methods of friction. When Luca realized this on the first day his jaw dropped, he assumed there would at least be flashlights. By the third week, it was instinct for him whenever they settled on a new patch of land.  He swiveled his backpack around to his chest and reached inside the deepest pocket, pulling out two charred pieces of wood and a small flat rock. He built a tiny fire pit using materials and dry grass he scavenged around the area and hunched over it, sitting criss cross. Then he proceeded to work the rock and sticks in a fast circular motion, sparks faintly appeared but didn't connect. He wiped the sweat off his hands on his book bag and tried again, this time with more intensity and determination. After a ten seconds of finding his rhythm,  a large spark flew off the rock and landed on the dry grass. He then covered the grass with his hands and blew in oxygen to cultivate the fire.

The fire crackled and jumped as he breathed life into it. He then stared at the newly born flame like a proud father. Being able to appreciate the simple things in life such as lighting a fire was something he took from that camp that he never got to experience living in the city. Being deeply connected to nature and resetting his brain back to a very natural state did wonders for him, and he came back to New York City with a broader mindset.