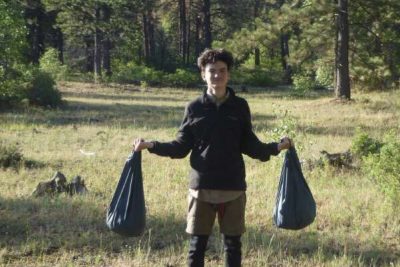 The car halted to a stop. The rattling inside the trunk woke Luca again. He was slumped over against the left side passenger window, half asleep. He had been handcuffed a couple hours ago and nearly yanked his hand out of the socket trying to clear the crust from his eyes. He heard the click of the passenger doors unlocking, the door on the right swung open. One of the hired escorts, a large African American male in a gray Nike Tech fleece sweat-suit extended his hand out to Luca to help him out of the car.

"We're stopping here if you need to use the restroom or get something to eat." He said in a friendly but dominating manner.

Luca nodded his head and climbed out of the backseat and ventured inside the highway food and gas strip. The escort stayed with him at all times so he wasn't getting any ideas of escaping, but when he passed by the smoke section of the 7/11 it triggered his impulses.

"Can you please get me a pack of cigarettes, If I'm being shipped off to rehab for two months the least you guys could do is that!" He pleaded to the escort.

The escort sincerely listened to him, and actually bought him a pack for the rest of the ride to the airport. All 3 of them were smoking on cigarettes after they left the gas station. For Luca, just the ambiance of smoking and listening to the radio with two other guys, even if they were escorting him to a rehab facility in Colorado, was a serene escape from the situation he was about to be thrown into.

After another hour of driving they reached the airport. As they were walking in Luca felt like a celebrity. He was a 5'7" skinny white kid walking through the airport surrounded by 2 large muscular African American men. People were staring at him trying to figure out if he was a high profile actor athlete or musician. Little did they know he is just an immature kid with no responsibilities whatsoever. As he walked past all of the stores and people, it suddenly hit him that the luxury that is our modern society was going to be completely stripped from him in less than 24 hrs. For the better half of the next two months he would be stuck in a cardio intensive wilderness rehabilitation program where you don't even get to bathe regularly.

He handed his passport to the flight attendant at the terminal and waved bye to his escorts before turning around and boarding the plane.