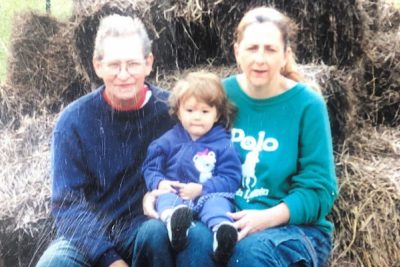 Sherry got out of the car and walked toward the giant field of pumpkins. Her husband, Frank, her daughter, Jodi, and her granddaughter, Anessa, followed behind her. It was a chilly October day, and the cold wind blew right through her crew neck sweatshirt. It was so windy she pulled her hair back into a low pony. It was almost Halloween and they needed to pick out a pumpkin for Halloween. Her granddaughter, who wasn’t even two, followed quietly behind Jodi.

“I think there’s a fruit market and bakery somewhere. We should go see what they have.” Sherry suggested. Everyone agreed and they set off to look for the market. After wandering around for a bit, they stumbled on the market. It was warm inside and the smell of fresh fruit wafted through the air. Everything smelled delicious. Sherry wandered around looking for one of her favorite treats, pie.

Sherry finally stumbled on rows and rows of freshly baked pies.  They looked and smelled irresistible. “Apple or Peach?” she asked her husband. They settled on apple because they were in season. Frank carried the pie, while Sherry held her granddaughter’s hand.  Her brown pigtails bounced as she skipped through the store. They began to walk back to the pumpkin patch. The little girl quietly looked at all of the large pumpkins that surrounded her and never strayed far from her family. They could still smell the bakery in the distance. The leaves and twigs on the ground crunched underneath their boots. They walked around the patch for a bit before Jodi decided on the perfect pumpkin. They all asked Anessa about different pumpkins, but she didn’t seem to care which one they picked.

“I want a picture of the three of us.” Sherry announced. They all looked around to find the best spot to take a picture and decided on the stack of hay that was a little bit outside of the field of pumpkins. Frank and Sherry sat on the haystack, while Anessa sat between them on their laps. It was still windy and everyone's hair was flying around like crazy. Frank’s grey, fuzzy beard was all out of place and his glasses laid crooked on his face. Jodi aimed the camera at them. Click.

“It’s fine, Mom. It’s getting cold, we should leave” said Jodi. The four of them headed towards the parking lot.