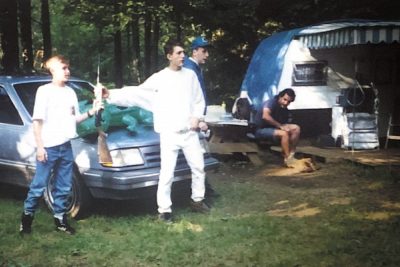 The idea popped into Sherry’s mind after walking around the corner store.

“Let’s go tubing!” she excitedly announced. It was a holiday weekend and she was at her favorite spot, Scottyland. Her and her family went almost every weekend.

“It is going to be pitch black soon and you’ll get lost” her husband warned.

“We’ll go with you, Sher '' her sister in-law, Marget and her husband, Chris responded. She knew it would be getting dark soon, but would be able to return to the camper before it got too dark. Only her oldest son, Shane, went with her. They started to make their way towards the creek and looked for a spot where the water would be deep enough to tube. After walking alongside the dirt path, they finally found a perfect spot. The group of 4 got in the water and started floating down in their tubes. They all laid there in peaceful silence. The hot day was cooling down, but the crisp, cool water still felt good. The only sounds they heard were the water flowing across the rocks and birds chirping. Soon, the sun started to set. None of them paid any attention to this and continued to enjoy the moment. All of the sudden it was pitch black and the current started to pick up.

“How are we going to find our way back?” her son Shane worriedly asked. They had no way of contacting anyone back at the camper or a flashlight to help find their way back. Sherry started to become worried, but didn’t want to start a panic. She quickly thought of a plan in her head.

“Okay, everyone back at the camper is going to be looking for us. Let’s send the tubes down the river so they know we are coming.” she stated. They all sent their tubes down and walked side by side along the creek. Everyone was scared, but no one wanted to make the situation worse by showing it. It was silent, and the branches and leaves crunched beneath their feet. Every minute that passed by seemed to feel like ten. Eventually, they heard a faint call in the distance. At first, they did not recognize what it was saying.

“Sherry!” they faintly heard. Once they realized they were calling for Sherry, the group let out a sigh of relief. They got a burst of energy and ran towards the voice. They met the voice and found Jamie, her son, and Chad, her son’s friend, waiting for them with a flashlight. Sherry’s husband had sent the two boys looking for them when it became dark out. Sherry realized they were back at the store and were not far from their campsite. They made the short walk home, but exhaustion set back in.

“I told you it was going to get too dark out” her husband said matter-of-factly. After that adventure, the group collectively decided to cut their camping trip short and return home that night.