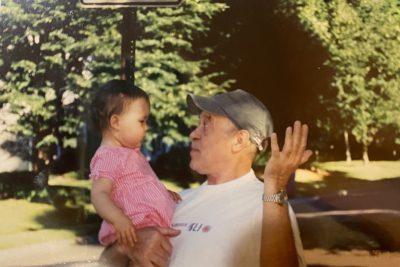 “Deva! Deva!” The four year old child mumbles, raising her arms so that Deva will hold her in his arms. He was her deda, but she was too young to pronounce it correctly.

“Uppy!” He smiles at his granddaughter as he picks her up and twirls her around. She squeals in delight, her eyes lovingly observe Deda, her very first best friend.

“Lubonka, It’s time to sleep.” Viktor comforts her onto her pink and white floral twin sized bed covered in enough stuffed animals to fill the shelves at Toys-R-Us. A natural actress, she nods politely as Viktor gives her a forehead kiss and begins his descent downstairs. He knew it would only be a matter of time before her energy levels spike, causing her to come alive and wreak havoc for the unfortunate working adults in the house. But right now, he has some respite.

As he sits down in a big dark blue armchair, he thinks about his adventures with his granddaughter. Deda has been babysitting her for a few months now. During the day, he strolls around the neighborhood in his gray tank top and army cargo shorts, blasting russian music through his portable stereo. He brings her with him to his fenced-in miniature garden full of tomatoes, cucumbers, and strawberries, protected from the deer and racoons that try to cleanse their diets in his garden. Then when she misbehaves, he sits himself on the bright yellow kids’ stool in the corner quietly, until she feels bad enough to go join him. When she scrapes her knees, he is the only doctor in the world who can help her with his mysterious healing concoctions. Two best friends, they laugh, eat, and nap together. That is, until nightfall comes and he has to fight his sleep to put her to sleep.

Disrupting his fond memories, an obnoxious scream permeates the house. He sighs and mentally prepares himself to face the howling monster upstairs. With pockets permanently full of all sorts of russian candies: caramel “cows”, cherry drops, and chocolate, he makes his way back up the white rug stairs to her room. Creaking the door open slightly, he sits gently on the bed. Like two cowboys in an old Western film, “Deva” and his granddaughter have a face-off. The negotiations begin.

“If you go to sleep now, I will give you a chocolate candy.” No hesitation. No fights. And no more screaming nights. Just like that, the nightly rituals began, and whenever Deda babysat her, she would sleep like an angel.