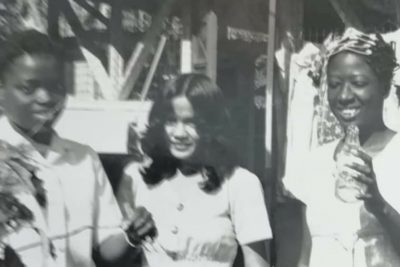 For years, it seems that time has hit her in the right place, because Olive knows this place is just like home, but with different people. It makes you think, it is affordable to pack your things, and venture out to find your own sanctuary. The people who have come into her court to become her knight’s templar were none other than Carlene, and Joni. She never knew it at the time, but those women will become the unofficial aunts to her children, she just needs to be patient. Their meeting wasn’t out of coincidence, but out of circumstance. She was far away from her land, so she wanted to stay close to her people.

She was one of the few people on her campus who hailed from the Caribbean, more specifically Jamaica. Now while neither Joni nor Carlene came from Jamaica, they did come from the Caribbean. They made their introductions, but Olive was a little too curious about Carlene’s voice. “Your voice, do you come from Barbados?” She told her “No, I’m from Trinidad.” Right after she said that Joni told them “And I’m from St. Lucia.” “Find a couple more of us, and the people here be thinking the Caribbean’s in their backyard” Olive said jokingly. They each laughed at her statement and Joni reluctantly said, “people already think that.” Olive was taken aback for a moment, but a slight hiccup in a conversation never stopped her. Then she said, “then let them think that way.” They all came from tough spots, and they know they will need to work twice as hard just to feel like they deserve to be treated with respect. Just because she is a dark-skinned, Jamaican woman, does not mean her life is set in stone.