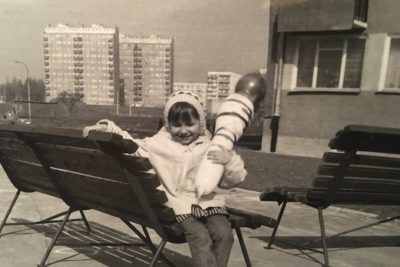 It was a normal Saturday morning for a 13-year-old Anna. She was about to go to the store with her older sister, Margaret, to buy a few things for their mother. At the time, they lived in a small apartment in the center of a city in Poland called Lublin. Everything was relatively close, so they didn't have to walk far. They quickly got dressed and left in a hurry, making sure they didn't forget their ration book with them. The stores were mostly empty, so they wanted to make sure they were there early before everything that's available sells out. The store wasn't that far from their house, but since they lived in the center of the city, there were always soldiers patrolling the streets, making sure there wasn't any trouble being caused. At least in Anna's city, the soldiers were Polish, not Russian, like in the capital and other major cities in Poland. Anna remembers the dark and ugly city she lived in and the depressing, ruined buildings she walked by every day. Finally, getting to the store, Anna and Margaret wandered the almost-empty aisles to look for the items their mother asked them to buy. Anna flipped through their ration booklet to make sure they still had stamps to buy what they need, or else the clerk wouldn't sell to them. All they needed was sugar, butter, eggs, and bread. At the register, Anna hands the cashier the booklet, where they ripped out the stamps from the book to show what they bought, and then they were on their way back home, passing by the same black and white route, down the same ruined streets, passing by the same ugly buildings, to go back to their tiny apartment where they'd continue living their fearful childhood in an unfair communistic Poland.