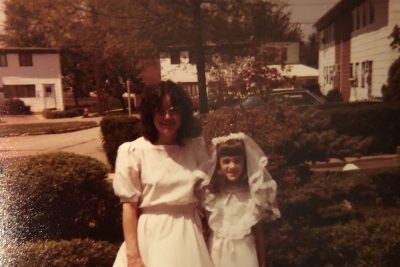 Oak Drive, like all the other streets in Pennypack, is set up in a cul de sac so it is the perfect place for kids to play with lots of room and the safest spot since there is little traffic on the street. With all of the houses on the street facing inward, it allows the perfect view for parents to still keep an eye on their children from inside the house. This is the neighborhood where children get plenty of freedom and stay out from morning until night which was a normal thing for kids in Pennypack to do on the nice days growing up in the 1980s.

Christine hung out with a girl named Christina and all their things on the street were differentiated by an A for Christina and then an E for Christine. Everything from water bottles to lounge chairs were marked so there was no mix up on who it belonged to. Christina had long dirty blonde hair and always wore a flower print dress and a big smile. She lived two houses down from Christine on Oak. Directly across the street from Christine was Kingsly. Fred went to school with the friend group on the street and was best friends with Kingsly so although he did not live on the street, he spent a lot of time with them. George’s house had the biggest driveway which was a perfect place to chalk. There was also a hill at the top of the street that was great for rollerblading and riding bikes down.

One beautiful fall afternoon, Christine was riding her bike down the street with her friends while enjoying the nice day before the start of a harsh winter. As she was speeding down the hill, her tire got caught in the uneven pavement and the entire bike flipped over leaving Christine to fly off the bike. Thankfully her arms took the brunt of the accident and she was not severely injured. However, she did end up scraping her chin and forehead as well as a black eye for a few weeks. Christina rushed over to Christine with great concern and tried to help in any way that she can. “Go grab Mrs. Whitley!” yelled Christina to Kingsly in order to get Christine’s mom to inform her on the accident. Kingsly rushed over and knocked on the door.

As I interviewed my mom, Christine Dorfman, in her home office, she seemed to relive the stories as she was telling them. She laughed along and reminisced on how much of a great time she had growing up in Pennypack. Since my mom was only in first grade when she moved into Pennypack, she spent her entire childhood while in this community. She enjoyed her time in Pennypack as a kid, and now 30 years later she moved our family into the community where my sister and I grew up in order to have the same great experiences.