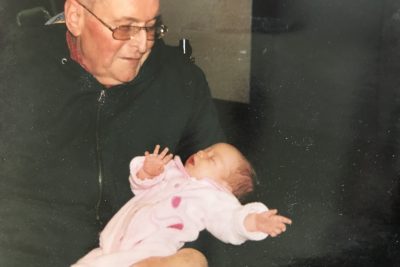 Anne Marie was on a school bus when she found out. They were about to leave for Julianna’s pre-school field trip, in which she was a chaperone. Everyone was very excited to get going until she got a phone call saying her husband had been in a car accident on his way to work. Her voice was weak and her hands were trembling while she tried to ask for more information. The tone of the caller led her to believe it was not good, and she needed to find what hospital he was sent to. Jack, her husband, told her to go on the field trip anyway and have fun, but that was not something she was able to do after the news she received. She ran out of the bus, across the church parking lot, and to her car, not knowing where to start her search. She knew it happened on route 202, so she hopped in the car and started driving in that direction, and went to the police station in Westtown to see if they had any information. They said he was sent to West Chester Hospital, which happened to be off of route 202.

When she arrived, she found her husband in the emergency room, and was relieved to finally see him and hear what actually happened. The doctors performed x-rays and found that there was a displacement of the rods in his back, which were placed when his back was previously broken, along with a fracture. She wanted him transferred to Christiana Hospital, which was closer to home. There, the doctors assigned to Jack thought he was fine, and tried to get him up and moving, which only made his condition worse.

During all of this, their son had died from cancer, and on the day of the funeral, Jack happened to have surgery that night. After a draining day at the funeral, Anne Marie rushed to the hospital to be with her husband, only to have more tragic news waiting for her, Jack is now paraplegic, paralyzed from the waist down.