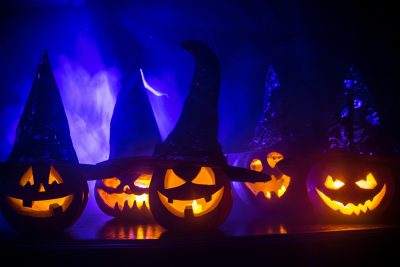 Holidays were not celebrated in my home, however, Halloween happened to be one of my favorite times of year. I admired the effort people put into trying to terrify children, it made me ponder whether or not Halloween was actually the day that  everyone explicitly worshipped the devil. Or if any Halloween myth were true in fact.

Approaching the school house, there were miles of upperclassmen dressed up in extremely scary costumes, in an attempt to frighten the younger students. I happened to be unphased by their attempts, due to my preparedness. The entire month my Aunt was determined to strike me with fear. She jumped out of closets, pretended to  be the boogie man as she hid like a snake underneath my bed, lying and waiting for the perfect moment to reach out and get me. ​There wasn't anything the students could have done to spook me, that my Aunt hadn't already done.

Carelessly walking into class, a witch sat in the first row of desks, directly in front of the teacher, which happened to stop me in the middle of my tracks. Int that moment, I immediately began to tremble. I frantically remembered my first ever trick-or-treating experience the year prior, from the sight of her costume. My mind was racing with thoughts. I took a step closer to the door, and all I could see was myself stepping into the streets of terror flooded with  people in random costumes chasing away innocent trick or treaters, and unapologetically picking up the trails of candy that had been left behind.

Proceeding with caution, flashbacks began to bombard my brain.

-- Approaching a large house, on the corner of a  block in South Orange New Jersey, with a closed in front porch, the terror struck through my body. I felt it in my bones.

Black sheets were hung so creepily, and a pitch blackness glistened through the night, which happened to creep out, effortlessly.

As I walked up to the porch, a small candle light peaked through the darkness, and a bowl of candy laid at the end of the light. Walking up the stairs on high alert, and slowly tiptoeing to the candle bowl -- “Booo” a man in a scream costume jumped out of the hidden wall and scared the witch out of me. I jumped off the porch in a witchlike manner and ran as fast as I could. I didn't look back, or stop to check my surroundings. I ran for my life.

Feeling as if I ran for eternity, once I stopped to catch my breath, I began to experienced severe chest pains from exhausting my lungs.--

Next thing I knew, I was in class hyperventilating from the distress my flashback caused. Laid out on the classroom floor, I looked up and saw a classmate handing out candy. In that moment all I could think about was how my Halloween night ended. I recall my Mom being furious with me for running away, so she stripped me of all the candy that I acquired (by casting witch spells to lure in the treats).