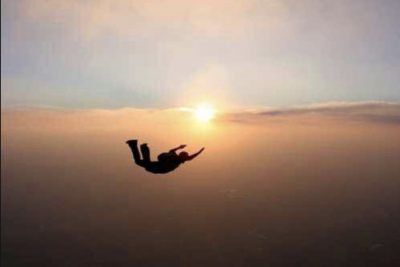 Fran was sitting in the plane flooding his thoughts with everything he learned during training  the past few days that led him to this point.  He knew the time was ticking and he was going to have to make the biggest jump of his life. Fran looked around at the other passengers in the plane some being his friends and the others were the instructors. While looking around he found that his focus always narrowed in on the radios on all the trainees' heads. He knew it was about time and then it happened, Taylor his instructor said, “Fran its time to jump.” On taylors count Fran had to jump out of the plane for the first time all by himself.

Fran jumped out of the plane and was gliding to the ground. It was a feeling he has never felt before. He felt a freedom while looking around at the world below him. The air was clear and although his breath was taking away metaphorically and literally he has never felt better. While taking in all he could as he was falling he felt the pull on his arm and looked to see his instructor grabbing on to him. After practicing pulling the parachute a few times, Fran sent Taylor away to wait on the ground for him. The time was now and all he wanted was for everything to go perfectly. He pulled the cord. The parachute opened and with it went his only form of communication with the ground, his radio. Helpless in the air he decided not to panic, he remembered what he learned and though he was on his own he knew what to do. He missed the landing spot for the people training and went right to the instructors spot. When he landed there were about 20 people yelling at him because he wasn’t listening to a word that was said. Little did they know he never got a single memo.