We set out from Philly just after dawn. 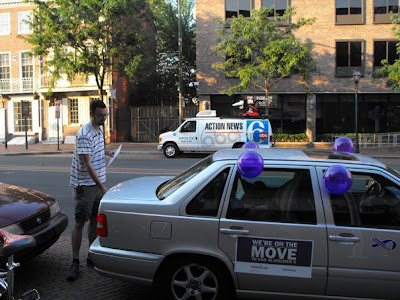 You may notice that my Volvo is looking a little more like Michael Jackson 1992, as opposed to 1972.  That’s because it’s not my Volvo.  After losing 17 pounds in 30 days on the last trip, I decided that air conditioning was a must for 2010. 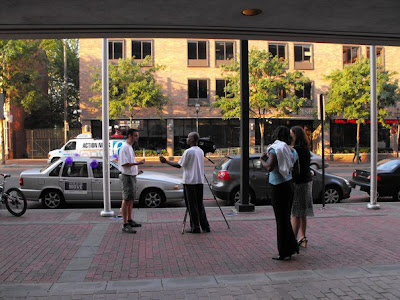 The Alzheimer’s Association had made a few calls and ABC News was there to send us off! 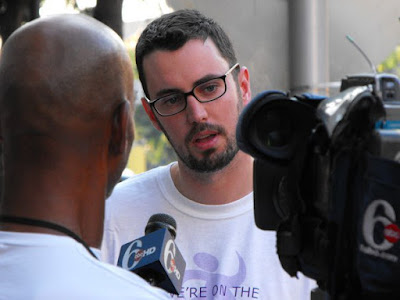 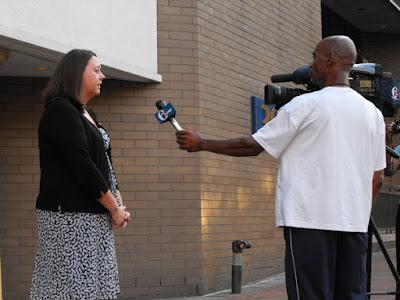 We made it about 75 feet before Drew popped the purple balloons in a fit of Hulk-like rage.  5 hours later, we’d arrived in Pittsburgh.

Sorry if you’ll now be walking around the rest of the day with a crick in your neck; still trying to figure out the new technology!

But as I said, the mission remains the same.  Drew and I are driving from coast to coast, seeking the wisest, most creative people in every community.  You never know what people might say when you walk into, say, a random comic book shop.

Advice from a (self proclaimed) Nerd

The whole project nearly got derailed a few hours later in Columbus, OH; there were so many pretty girls that we almost gave up and decided to stay!

By 930 pm we’d nearly reached our crashing point for the night in tiny Ostrander, OH.  We’d driven 530 miles the first day, but both agreed that it felt like 50 at most.  That might change as we’re hauling another 500 across Kansas, but there’s something about this journey that distorts your sense of time.  Normally when you’re driving you have Point A and Point B, and so you spend the entire time waiting to arrive.  You’re counting miles and calculating the time left – 3 more hours, 2 more hours, 100 more miles.  On this trip, you’re not thinking about that, because beyond Point B awaitsPoint C, D, E, F ect, and you can’t keep that much stacked up in your mind, so instead you just look out the window.

The last two miles of Day 1, we turned down this dusty road – so narrow it felt like we were squeezing between rows of corn.  Thousands of fireflies flickered on both sides, far as the eye could see.  They didn’t hover, like they do back home, but seemed to be drifting up from tiny fissures in the soil.  Like when you poke a fire and the embers dance up into the air – or like when you’re a kid, and you turn your head too fast, and for a second those tiny motes of light dance before your eyes.  When I was younger, I used to think it was like seeing the seams between this world and whatever was on the other side, looking back.