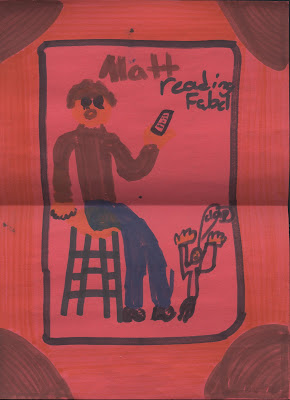 To Ryan and all the 4th-graders at Horace Mann Elementary… you’re very welcome!

I was having rough day, but when I came home and found your thank-you cards in the mail, they cheered me up.  I have to say…of all the ways the “Spaces” project has changed my life (and there are many) one of the best is the  that I now enjoy opening the mailbox again.  It’s a small but wonderful thing.  I remember being younger – much younger – teetering on the edge of a lawn chair so I could reach into my parent’s mailbox.  Even on the chair I couldn’t see inside – I had to reach in blindly – and that only made the whole process more mysterious.  Back then there was no difference between the birthday magician who made coins vanish and the mailman who made letters appear; if anything, the mailman was even more impressive because he performed every afternoon.  It’ll never be quiet the same, but I’ve got a little bit of that wonder and joy back – if only for a split-second before the lid opens – and for that I thank you. 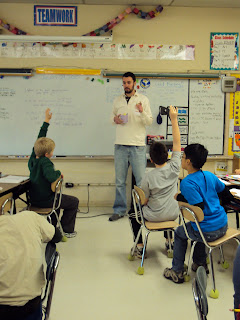 I started off by reading a little fable I’d written, and then we did a writing exercise.  They were excited to discover that when you write a story, ANYTHING can happen.  Like having a cow fly up to the moon for a tea party.  Or meeting a person who is five million years old, but has never clipped his toe nails (!).

We also discussed my project and all the wonderful, surprising wisdom they might find in others, and themselves.  My favorite part was when in response to a prompt (“Think of something you’re really good at…and give a piece of advice about it), they wanted to know what advice their teacher, Ms. DiMarco, would give.  I’ve been friends with Ms. DiMarco since college, and so I mischievously suggested that she was secretly really good at DANCING, and that led to all 20 of us dancing wildly around the room.  Had I been near a computer I would’ve provided this actual footage from college:

A few weeks later I was invited to visit with the 6th graders at Ridley Middle School. 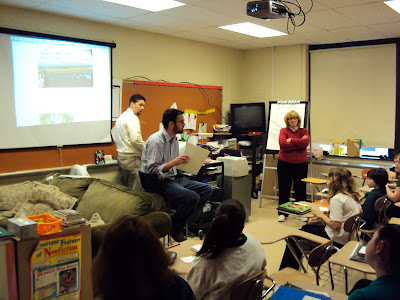 The “traveling workshops” have been a fun extension of the project for me.  I teach at the university level (don’t be impressed…I’m at the bottom of the ladder…below the bottom of the ladder…I’m the guy in the back alley leaping with all his might to reach the bottom rung of the fire escape) and I first started doing “wisdom-themed” exercises a few years ago.  I had the students interview each other, and ask three questions: 1) What is the best piece of advice anyone’s ever given you? 2) If you could go back to the beginning of freshman year, what advice would you give yourself, and 3) Think of something you’re really passionate about – give advice about it.  It was just this stupid get-to-know-one-another activity, but I was always amazed by the diversity of the responses, depending where people came from and how they grew up.  That’s part of what inspired the project – I thought, what if I could turn this entire country into a giant classroom – imagine the responses I would get – ranchers from Wyoming, artists from Seattle, businessmen from New York – and so I just set out to see who I would find.  But anyway, since I’ve been back and doing the workshops, it’s been fascinating to see the responses from different age groups.  You might not think a 6th grader could have more wisdom than a 90-year-old war veteran, but then clearly you’ve never met any 6th graders.