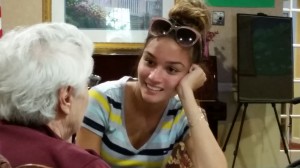 Reflecting on 6 months with the SBYF project.

Working at the Spaces Between Your Fingers Project definitely took me out of my comfort zone.  I was forced to talk to strangers almost every day.  At first that task seemed daunting—having to approach people on the street and ask them if they could spend a couple minutes talking to me—but after a few weeks, I saw the reward in doing that.  I got to listen to a lot of stories and meet a lot of interesting people.  I found that I would talk to some people for an hour and not even realize how much time had gone by.  In all honesty, I could’ve probably spent even more time talking to certain people…Everybody is made up of stories and SBYF allowed me to hear these stories and realize that no one person’s life is the same as another’s.

The most rewarding days though were the days I spent talking to individuals with Alzheimer’s and dementia.  They had so many stories they wanted to tell and some of them no longer had enough words to be able to say what they wanted to say.  Seeing people fight so hard for a memory and fight to find the right word made me appreciate both life and language like I hadn’t before.  Alzheimer’s takes away the things that make you who you are—it takes away your memories; and by becoming a part of the SBYF Project, I was able to record those memories that the disease hadn’t stolen yet.

By the end of my internship I knew I had made a difference not only in others’ lives but also in mine.  My grandparent’s had Alzheimer’s.  I never had the opportunity to meet my grandfather and by the time my grandmother came to live with us, she didn’t remember who anyone was.  She didn’t really remember who she was.  She remembered her favorite color was red and that she was afraid of thunder.  I was young when she passed.  I never spent the time to talk with her—to try to get to know her.  SBYF, in a way, gave me a second chance.  The Project allowed me to realize that everyone needs someone to talk to—even if those jumbled words no longer seem to make sense.