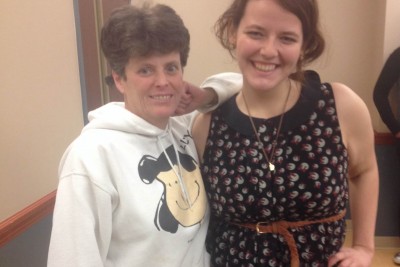 We asked our Junior Memory Collectors to pause and reflect at the halfway point (10 weeks) of their work with SBYF.  First up, Victoria Durand. 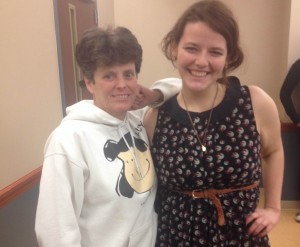 From a recent workshop in Media, PA

Sitting down to write a reflection of my first ten weeks with the Spaces Between Your Fingers Project was peculiar because it was, essentially, writing a memory about memories.

Working with Spaces Between Your Fingers meant doing a lot of things that I wasn’t used to, or for the first time. As a happily introverted person, sitting down with a complete stranger, talking to them, and getting to the bottom of their life story within the course of an hour was a completely foreign experience to me. I found that when you sit down to interview someone, you start with something of a void- if you ask someone what the best or most interesting memory of their life is 99 times out of a hundred, they won’t think of something off the top of their head (I wouldn’t either). So most of the challenge of giving an interview is finding and asking the questions that will trigger those memories.

I’ve learned that a simple “What were your siblings like? Who was the funniest?” can prompt a series of stories about say, their brother Jimmy and what a riot he was. Often, it seems that the earliest memories that people have are the strongest. Just last night, the woman I was talking to was able to give the most vivid description of her father, an old fashioned Irish Catholic man she described as having “the Luck of the Blarney.”

Another important question is “How did you meet your wife/husband?” That has been the source of so many great stories, and I could see so many people just light up when I asked it. I remember asking one woman about her husband, and she told me that her husband was at a nearby hospital and she was distraught that they wouldn’t let her visit him. She confided in me her plans to sneak out and go see him anyway. The only thing she was concerned about, she told me, was that there might be snakes in the woods between the two hospitals.

Often, I ask what the interviewee’s husband or wife was like, just so I can listen to them describe them, because they always instantly know all the things they’ve going to say.

Having someone tell you the things about themselves that are most important to them is a really incredible feeling and leaves this kind of bond, even though the odds are you’re not going to really see them after this.

A lot of people don’t think they have a story worth writing down. And I mean, hey, if I were just walking down the street one day and you asked me what the most important story of  my life was, I would have no clue what to tell you. We seem to have this idea that you have to be this bigshot, important person, or done something to make history in order to have a story. But that’s not true- every single person I’ve talked to, even the first graders I’ve spoken to in schools who only have about four years worth of memories, have something beautiful and important to share.

I know that the purpose of the Spaces Between Your Fingers Project is to preserve things for future generations, but I feel like it does its most important work (at least right now) for the people we talk to. When I walk away from a workshop, or from talking to someone, I can tell that talking to them helped us both. I think there is something incredibly therapeutic about getting to tell your story.

I’m happy with the direction the Spaces Between Your Fingers is moving in. I like being able to sit down with one person for a long time and really unpack what they have to tell me. And at the end, I know it will be incredibly rewarding to look back at the countless stories that we’ve collected and know that each and every one of them mattered incredibly.

Do you value reflection, connection, and imagination?  Do you love stories?  Want to get involved?  Contact us and we’ll help you start discovering and documenting the amazing stories all around you.