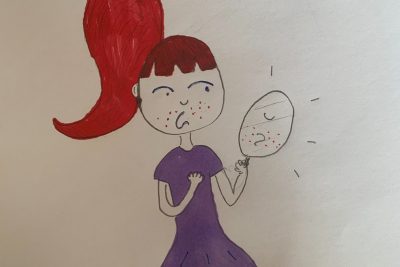 “I hope you’re all excited today. It’s the first day of school! Now, I want you to turn your books to page twenty-three. I want you all to work in groups. So move the tables closer together,” Ms. Butterworth announced.

Ann moved her table next to this handsome boy with big sparkly green eyes and blonde curly hair. She thought for a second, this might be love at first sight..until he opened his mouth.

“Wow, that thing on your chin is huge. It looks like it is about to explode,” Michael said to Ann.

“Yeah it’ll explode in your face!” Ann said in her mind.

She looked at him and covered her chin with the sleeve of her hoodie.

“Your eyebrows look like the twin towers. Are you going to cover that too?” Michael laughed.

Ann raised her hand and asked, “May I use the restroom?”

“Yes, you may. Here is the hall pass,” Ms. Butterworth said.

Ann bolted out of the classroom. She has never been so humiliated in her life. As she reached the restroom, she went into the first stall she could find and cried. She cried so much that she felt as if her eyes were bleeding. Michael was the only cute boy she ever liked. She did not know how cruel he could be. Her heart broke into a zillion pieces. She felt like the world was going to end. The only boy she ever liked thinks that she is ugly. Ann never realized that she was unattractive. She looked into the mirror and saw her reflection. Zits. They were everywhere and there was nothing she could do to hide them.

Ann heard a big flush and quickly wiped her tears away.

“Why were you crying?” Christine asked as she was washing her hands.

“I heard you while I was in the stall,” Christine said.

“Oh.. a boy. Well, my mom said boys like to tease girls because they like em,” Christine said.

“You think he likes me?” Ann said.

“You are a pretty girl. So yes, I think he likes you,” Christine teased.

The girls went back to their classroom. Ann went back to her seat and ignored Michael everytime he tried to tease her.