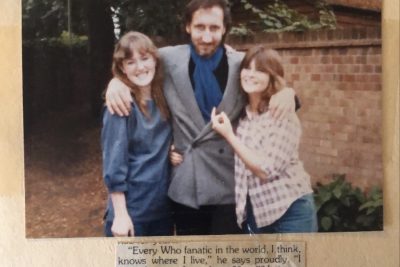 The hotel was crowded to stay the least. We were staying in the annex, a stuffy and hot floor of the hotel that acted as a permanent home to a few families. There was no air conditioning and the brutal July heat did not let us forget that. After a day of rest we set out to meet Pete Townshend; we knew approximately where his studio was but we had no clue how we were going to get there let alone get inside.

After a short train ride to Twickenham we began our search for Pete's studio. Upon stepping off the train, Josette and I walked across a footbridge over the river Thames and found ourselves wandering again. We stopped into a candy store that felt like it was from the future; walls bright white and candy as far as the eye could see without a speck of dust in sight. Upon settling on licorice as our nutrients for the day, we walked back out into the July sun eager to find Pete's studio.

After a considerable amount of time was spent walking around Twickenham, we finally saw the studio. At this point the sugar from the licorice had worn off and both Josette and I were hungry. As we approached the studio a man happened to exit through the front doors. Seeing as we seemed a bit out of place, he asked if we needed help with something.

"We're here to meet Pete!" I chirped, quickly following up with "We're from America, Philadelphia."

The man, who spoke without a British accent, explained that he too was from Philadelphia and he had been working in the studio for roughly the last decade. He introduced himself as Henry and offered to take us to lunch as Pete wasn't in yet. We happily agreed and accompanied him to lunch at a local pub. We talked his ear off about our mission to meet The Who and how I was a member of The Who Club. We explained how the lyrics we heard had gotten us through the awkward stages of high school and how we felt eternal gratitude to the band. Henry happily listened, chiming in occasionally to tell us about the studio and what working with the band was like.

Once we had finished lunch, we went back to the studio and waited for Pete's arrival. Henry had told us that both Pete and Mick Jagger would be at the studio shortly if we had any interest in waiting. Of course we agreed to wait, and only a short while later, Pete Townshend, the man we had flown halfway across the world to meet, arrived in a sleek dark blue BMW. My stomach dropped and my mouth got dry as I my mind searched for something to say.